Have a joyous Easter and may all your eggs contain jellybeans 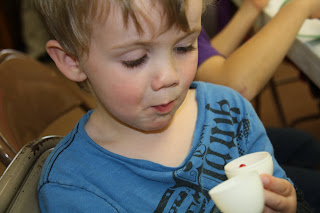 Evan and I enjoyed the Easter party at his daycare.  I can't believe those little tummies can hold so much candy.  He let me have a few of his jellybeans, though.  They are a favorite of mine.
Posted by Linda at 10:52 PM No comments:

Tonight we watched possibly one of the most well-known spaghetti westerns, The Good, The Bad and The Ugly staring a very young Clint Eastwood and Eli Wallach.  Of course, they are called spaghetti westerns because they were made in Italy.  Only the stars of the movies spoke English.  As far as I could see, all the rest were dubbed.

This movie and the “dollor movies”  Fist Full of Dollars and For a Few Dollars More were directed by Sergio Leone.  Other than the great music by  Ennio Morricone, Leone is know for a technique where action happens to the side or bottom of the screen.  For example, a very close mussel of a gun would suddenly appear from the side or, in one instance, a shovel to dig a hole suddenly appeared from the bottom of the picture.  If this hadn’t been pointed out to me before the movie started, I probably would have missed the directing technique.

The Good, The Bad and the Ugly, like most older movies, is long.  I still enjoyed it, though.  Want a feel of the music?  Here is the original song by Morricone:   Il buono, Il brutto, Il cattivo

Pillars of the Earth and World Without End are intriguing stories set in medieval England featuring strong willed, intelligent women and men, who are caught up in a code of conduct of the time which for some is good but others evil.  In addition, and more importantly, it is about those who are willing to risk their happiness and sometimes their lives by stepping outside those norms.

Pillars of the Earth begins in the year 1135 and ends 1174.  Major characters of Prior Philip, Tom Builder, Aliena and Jack Builder live in and love the small hamlet of Kingsbridge and its cathedral.   Their lives are centered around the  construction  and commerce needed for the group of people to form a vital city.  Led by often unscrupulous earls, kings and even the church hierarchy, it is a story of keen wit and resilience.

World Without End follows Kingsbridge and the townspeople beginning 200 years later at 1327.  Merthin, a descendant of Jack Builder and Caris a descendant of Tom Builder are the central characters as are Gwenda, a quick witted girl and Ralph Fitzgerald, a savage and unscrupulous knight, later earl.  Once again there is work to be done on a cathedral with a tower that will be the highest in England.  Caris never believes blood letting or goat dung are good medicine and experiments with herbs and cleanliness.  It was during this time that the Black Death rages in England, affecting each of the central characters in the book.

Be assured the next book I read will be set in modern times.  I’ve been caught up in medieval England for too long.  Still,  I am hoping that Mr. Follett will be making his Kingsbridge story a trilogy. 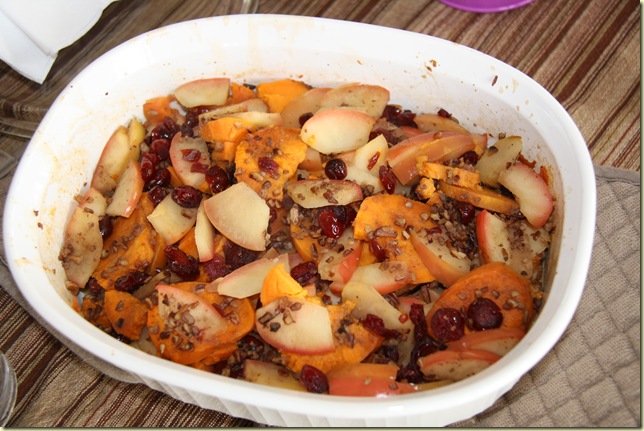 Sometimes I wonder why we ever pay to eat at a restaurant.  It seems nine times out of ten home cooked meals are the best.  Sunday Kim and Marc invited us for steaks.  What a delicious meal.  Steaks done to perfection, stir fried asparagus and this beautiful concoction.

According to the web site Essentially Healthy Food,  the experience of beauty in food can be attributed to these factors:
The dish that Kim created Sunday fits all these categories.  She didn’t have a recipe, but obviously it contains sweet potatoes and apples with Cranraisins, pecans, and brown sugar to taste.  She said she precooked the apples and sweet potatoes for a short while and then combined ingredients with a splash of lemon juice and baked for 30 minutes.

Wouldn’t this be a great fall recipe when sweet potatoes and apples are fresh?  It was delicious right now in the spring, too.
Posted by Linda at 9:31 PM No comments: