Rolln’ with the big boys

My friend Sue and I used to be neighbors.  Not every week, but at least once or twice a month, our families would get together on Sunday evening for pie.  Sue and I had a little (maybe a lot) of friendly competition going on with pies.  It wasn’t that we would compliment each others, but mostly brag on our own.  We both thought would were the best pie bakers in the area—and no one eating them would say we weren’t.

Sue continues to make excellent pies, but I’m out of practice.  I had to throw my pastry cloth away and I have not been happy with my crusts since.  And, a flaky, tender crust is one of the most important parts of a superior pie.

I know our guests Thursday night are excellent pie makers.   They bring them to church dinners.  So, rather than being intimidated, I decided to throw it all in and make an apple pie for dessert.

Since I still have not purchased another pastry cloth, I rolled the dough between two pieces of parchment paper.  Rather than using some of the different types of crusts I have experimented with lately, I went back to 2 cups flour, 1 1/2 teas. salt, 2/3 cup butter flavored Crisco and 4-6 tabl. ice water.

I used rather tart apples but added a little lemon juice just in case.  Also, plenty of sugar, a little cinnamon and nutmeg.

The pie was delicious.  They all complimented me.  (I know, who is going to criticize a homemade pie).    The crust, thankfully, was good.

There is one pie maker I won’t be competing against, however.  That is my cousin Kaylene.  Her pies are wonderful.  (She worked in a gourmet pastry shop). She has a secret ingredient that she’s not telling.  She must because they are just too good.

We invited two thoughtful couples who also happen to be neighbors over for dinner tonight. We needed work done on our boat. They not only did the work, but came and got it. How thoughtful was that?

One of the couples will be leaving right after Christmas for warmer weather so what better time than right now.

My menu was pork, scalloped potatoes, two vegetables, homemade bread and apple pie with ice cream. Lloyd and Carolyn Wulfkuhle recently celebrated their 50th wedding anniversary by giving each person a collection of their favorite recipes. This is one: 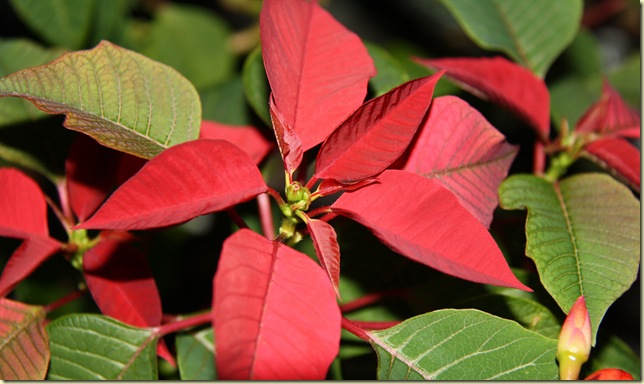 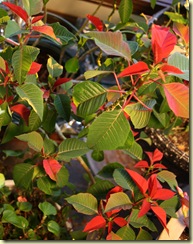 This was a lovely huge poinsettia a year ago.  It kept its big red leaves at least through Valentines Day.   Then the plant continued to thrive until sometime in August.  It really began to look spindly and rank.

I sat it out on the porch and watered it if I happened to remember.  This fall when the plants all came in, I debated about tossing it.  As I said earlier, I have trouble with that so I brought it in to the south sunny window and started watering it regularly.

About a week ago, I noticed the leaves were starting to turn red.  Every day it gets more red leaves.   I did not do anything other than let it sit in the natural light and dark.  No dark closet at night to “force” it.

What a Christmas joy this plant as turned out to be.

By the way, in the lower right hand corner is a Christmas cactus bud that looks might it might be on track to bloom right when it supposed to.  A lot of my friends’ Christmas cacti are blooming early.

Christmas tree in the forest?

Well, maybe if I squint real hard, lean back and look through bifocals while tilting my head sideways….

I do like all my plants keeping the tree company, though. 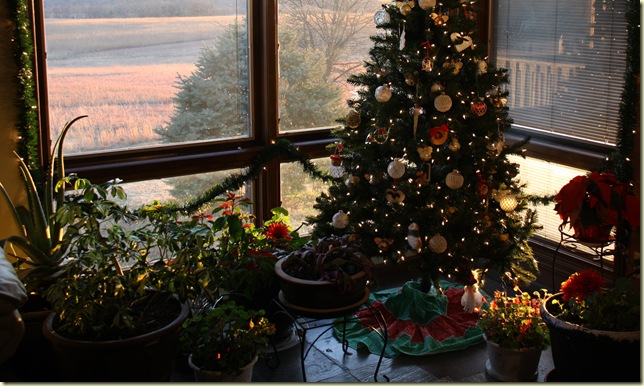