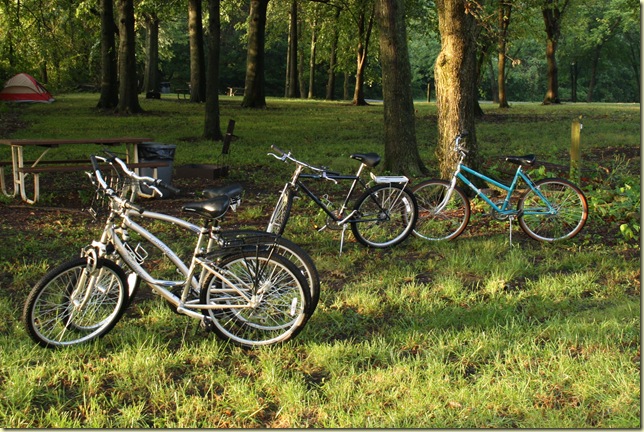 Lots of rain, but we all fit in the pop-up and played pitch until 11:00.  (Men won but women made a strong comeback).  Breakfast and then on the trail!

On August 28, 2010, when we were returning from Colorado, it seemed we were seeing a lot of Rvs so we decided to count.  We started at Limon, Colorado and ended at Topeka. During that time, we counted a total of 182 recreational vehicles. This included any on the road plus any we could see from the road, such as rest stops. We pretty much drove straight through only stopping for the night at Wilson Reservoir and we didn’t count at the camp ground.  Also, we were  careful not to count one twice when we stopped. Here is a graph breakdown. 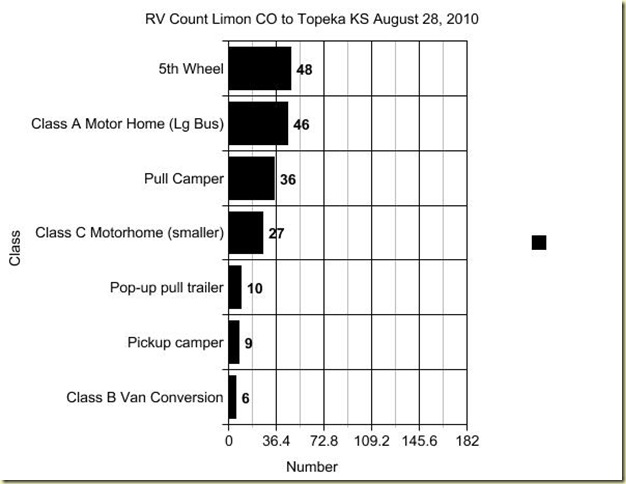 Not surprising, Class A Motorhomes and Fifth Wheels were most prevalent with pull campers not far behind. My guess is young families would more likely have the pop-up pull and retirees might have the bigger rigs. Also, I 70 might have more big rigs than backroads.  If we would have conducted this survey on the mountain roads of Colorado, our pickup camper choice would have a much better showing.
Speaking of backroads, it should be noted that many, if not most, of the big motorhomes were pulling another vehicle. So, these larger vehicles are able to park and then go exploring.
Just for fun, this graph shows self propelled such as buses versus pulled rigs such as 5th wheels and pull campers. 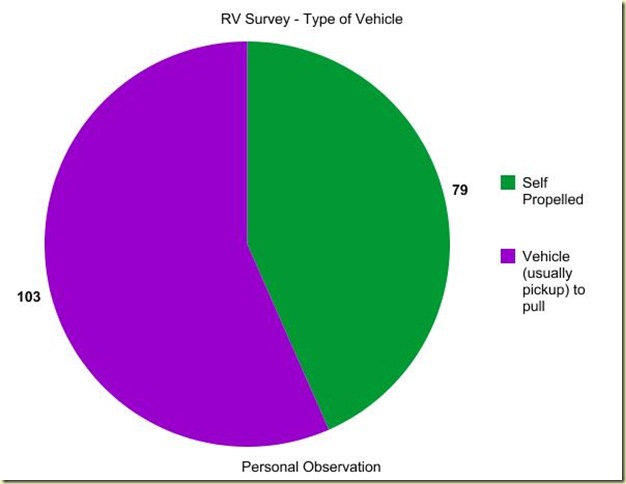 Of course, we had no way of knowing how many had a tent packed in the back of the car. Or, the way we started, a van with an air mattress in the back. I applaud those “mobile backpackers” as I like to call them
This little informal survey makes me think the RV industry is alive and well. It shows there are all kinds of ways to sleep besides in a motel room.
I’ll say, “Goodnight. The bed bugs can't bite.” to that.
Posted by Linda at 6:36 PM 1 comment:

I forgot that I took three pictures with the idea of photostitching them together.  I have many things I want to get done today, but here is what I have been doing instead.

The Sand Dunes National Park is a unique place to visit, especially sitting at the bottom of the Santa de Cristo mountain range.  There was a storm moving in which made a unique lighting opportunity.  In order to get a scale, they were at least a half mile—maybe closer to a mile from where these pictures were taken.

Or, by including the foreground, here is a more scary view. 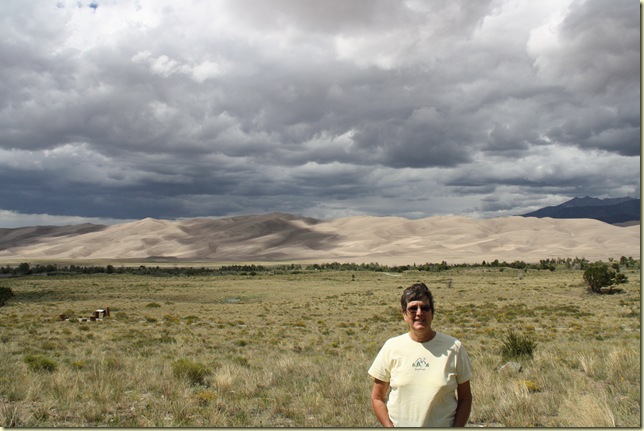 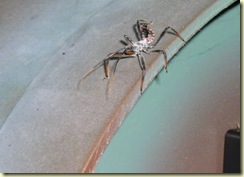 This is a Wheel Bug.  For some strange reason these ugly little guys liked to sit on mailboxes.  I took this picture in 2006 and wrote about them here.

Chip, our neighbor, friend and  Monarch Watch Director at KU is looking for these bugs.  Monarch Watch is having an open house Saturday and he wants unusual (he must mean ugly) insects to put on display. 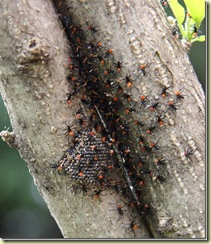 At that time, Chip told us these are wheel bug nymphs.   I think they did not make it to maturity due to a “oil spill.”  Now Chip wants these bugs and they are no where to be found.  Thinking Rose of Sharon might be a sought after host for babies, we looked all around.  Nothing.  I’m sure Chip will come up with one or two on his own.  I can’t say I’m too disappointed we can’t help him out.

By the way, I highly recommend attending the Monarch Watch Open House.  There are all kinds of things to see, most importantly lots of Monarch butterflies.  Here are details.

Flying High and Marching Along

What an eventful and fun weekend!
Saturday morning we ran to Lawrence for a couple errands.  This was the scene on our neighbor’s silos when we passed coming home.  I count 11 buzzards on top and there was one in the air outside the picture.  Everything is alive and well around that KSU flag as it was in Manhattan at the stadium.  The Cats did themselves proud against UCLA. Sunday got a late start as the three little grandboys spent the night in the basement.  Nana didn’t do too well in getting them to bed so they were a little late getting up.  Long time friends—I mean l-o-n-g time friends came by for dinner and conversation both Saturday and Sunday evening.  We met both couples 44 years ago when we lived in Emporia and attended Emporia State University.
Then this morning we took off for Chapman and the Labor Day celebration there.  Before the parade, we had an old fashioned picnic at the park with Dan’s brothers.  It was the fried chicken that made it seem old fashioned, only no one fried it themselves.
Then the parade of bands 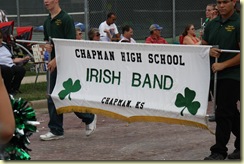 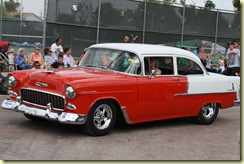 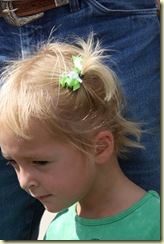 Lots to do this week before another exciting weekend coming up.
Posted by Linda at 11:27 PM No comments: