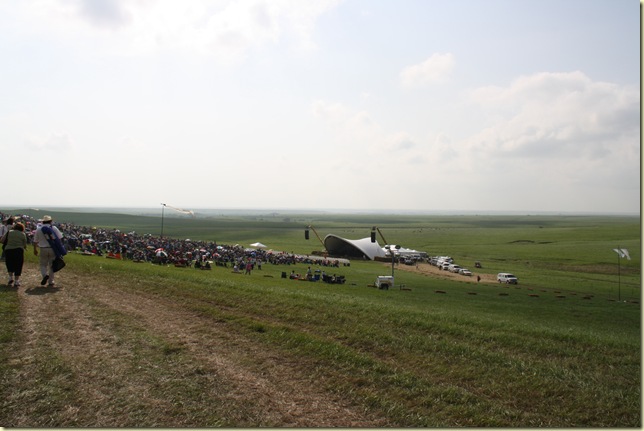 I can hardly wait!

Stay away rain!  A day I’ve looked forward to this day for a long time.

If I have cell service, I will be sending short posts via Twitter from the Symphony site all day.  You can check my updates at the left under “Linda’s Short Musings”

Find a sports talk radio site or sign up for Twitter and search #Big12.  Both a lot of news—legitimate and speculative.

From time to time I post recipes. I do this for a couple of reasons. First, I think you might be interested. Second, I sometimes misplace a favorite and archiving them here makes sure I won't lose them. I made these sugar cookies last weekend for the get together for Amy Kay. They are my Mom's recipe and perhaps Grandma's before that. I like this recipe because they are made with butter and with careful baking, they taste delicious without frosting. However, most of the time sugar cookies are not right unless they are frosted so I am also including Kim's frosting recipe. She decorated cakes years ago and I think this recipe came from that experience. It's a good recipe--tasty too.

Notes: I always use butter and cream. Be careful with the 400 baking temperature. They can easily brown too much—I bake mine around 375. These are delicious as is. Almost a butter cookie. Not sure why the recipe doesn't require salt. I throw in a little

Note: this makes enough to frost a cake. I made a double batch of cookies and I had a lot of frosting left over. Also, I add vanilla. Kim says this keeps well in the refrigerator.
Posted by Linda at 11:10 PM No comments: 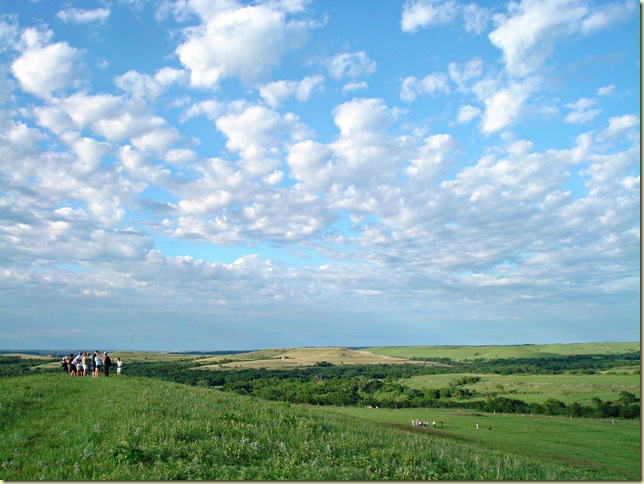 The Konza Prairie is a 8,616 acre native tall grass prairie preserve in the Flint Hills near Manhattan, Kansas.  It is owned by the Nature Conservancy and Kansas State University.

On Sunday evening, June 6th, The Friends of the Konza Prairie had their annual Wildflower walk.   It worked perfectly for us to attend, since we were in Junction City for Amy Kay’s celebration at Zion Church.

The Konza is primarily used as a research area by KSU’s Division of Biology and the main part of the ranch where the wildflower walk was held is not normally open to the public.  So, this was a opportunity for us to not only see a small part of the research but hear the docent share knowledge about the grasses and forbs.

It happened our docent’s specialty was the bison herd.  So, we had the opportunity to learn about the herd management as well the grassland.

There is another class beginning next winter for the docent program.  Dan was interested.  He would be good.  Me not so, but I might tag along.  We’ll see when the time comes.  It would be an hour drive one way.

There are also Konza Prairie hiking trails open to the public year around.  We have not hiked these, but hope to soon.  Friends who have walked them say it is beautiful.  It would be a good destination for our family.  The Colorado group  is used to mountain trails and they might enjoy a different type  of scenery.  Definitely early morning or evening would be the best time.  Not much shade out there.

My favorite wildflower?  Butterfly milkweed.  They are a beautiful orange and Sunday evening the butterflies were bouncing about on them.

Birds chirping, butterflies flitting about with a slight breeze rustling the tall grass. You would think the terrain, with its ditches and ravines, and morning atmosphere is June 2, 1856, when John Brown, anti-slavery opponent, is set to lead his militia against a pro slavery force from Missouri.

Actually, it is Saturday, June 5, 2010 and men from Kansas and Missouri dressed in period costumes are set to recreate the Battle of Black Jack at its original location east of Baldwin on Hwy 56.

Obviously, the authenticity of the day was a priority. The booths were selling period items and the people selling them dressed in appropriate attire. The blacksmith was using equipment of that time. Ladies were hand piecing quilts in addition to a basket and broom maker selling their wares. All the while, soldiers were milling around the area as if preparing for a confrontation.

John Brown, set apart from the others dressed in what appeared to be preacher attire, carried his gun as if daring a man to disagree with his antislavery stand. His militia looked to be farmers gathered from the area.

The Missouri contingent, dressed similarly was led by Capt. H. C. Pate, commander of a company of sharp shooters looking for John Brown.

There was a lot of shooting, yelling, groups of armed men advancing then dropping back. It appeared several were wounded. Finally, the Missourians waved the white flag and with plenty of guns aimed at each other, talks began with Pate eventually, seeing he was outnumbered, surrendering. Check here for a written account of the battle.

After the battle, I walked to both encampments. John Brown's men were traveling light. They gathered down a ravine for bread, cheese, apples and water. The Missourians had tents but ate similar food. The pro slavery bunch was ready to talk. It took them a while to load up their pipes and settle back. It seems there was bad blood on both sides. The skirmishes back and forth between the territory of Kansas and Missouri during the early days of the Civil War were small but bloody, likened to gang wars of today. Missourians came into Lawrence and burned the hotel and newspaper office including the printing press, but killing no one—that time. John Brown had blood on his hands with his alleged involvement with executing five proslavery men at Pottawatomie Creek.

Truthfully, as I stood off to the side listening and watching, I somehow felt, even yet, some tension between the visiting Missouri bushwhackers who stalked like tigers and the group gathered listening with their Jayhawk caps and shirts.