For some, a cemetery is a good place to live 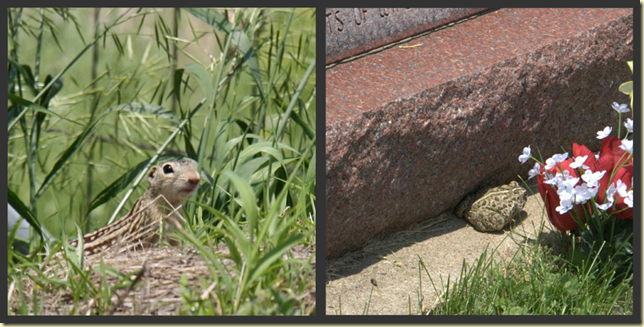 Retired parents of a close friend no longer take long vacations. Instead, they leave early in the morning and drive a loop, returning in the evening, always in Kansas. I thought of them when we recently turned out of our driveway at 8:00 am. Our destination is Riverton, Kansas, about as far as the Kansas Frontier Military Scenic Byway will take us before entering Oklahoma. We have an appointment to pick up a hay trailer and we need to move along with few stops.

At Globe we turn east on Hwy 56, also a historic route that roughly follows the Santa Fe trail. We briefly stop at the historical site of John Brown's Black Jack Battlefield near Baldwin City. A battlefield reenactment will take place there on June 5th. We'll be there. I am sure excitement will ensue for me to report.

To connect with KS Hwy 68 which will take us east to the Scenic Byway, we travel south through Wellsville, population 1,600.  Although born in Kansas City, Chely Wright, award winning country artist, calls this small burg her hometown. We know because there is a sign and a street named for her. It is good they continue to be proud and supportive of their talented native.


Now on Hwy 68, we pass the Somerset Ridge Winery. Free tasting. Welcome. We seldom pass one of these signs without stopping. We will be back. How can we pass up Kansas Buffalo Red or Aphrodite among many other wine selections.

Next is the Louisburg Cider Mill and their delicious cider and cider doughnuts. Darn time restraints. We stop anyway.

The Kansas Scenic Hwy 69 runs north and south along the east side of the state.  According to their web site, it follows the route used by the military to transport troops and supplies to different forts. This route was more than just a supply transportation route. Before Kansas became a state, it was Indian territory and the military outposts and trail were used to keep outsiders from  encroaching on the Indian Nation land. When Kansas was opened up for settlement, the route served as a battle line between the slave state of Missouri and the (eventually) free state of Kansas.  The largest cavalry battle in the Civil War and the only major battle fought in Kansas was at  The Mine Creek Battlefield in 1864.

We have previously visited both the Mine Creek Battlefield site, museum and Fort Scott, both right along Hwy 69. Very interesting and highly recommended. Be sure and take the tour and hear the Ranger's talk at Fort Scott’s beautifully renovated post.

Don't miss the new rest stop at the Junction of 69 and Hwy 52. It has an educational exhibit inside and a walking trail outside with informative markers. Just south of the rest stop on an access road is historical town of Trading Post.

We pass a sign that informs us Big Brutus is only 13 miles west. I really do want to see this huge mining implement. But not this time as our trailer is only a few miles on down the road and we have to pull it home.

Unbelievable for us to have passed all these tempting stops and still arrive on time at Riverton, a small unincorporated community where these trailers are made. The trailer is the type which “dumps” big round bales off the side. According to the person where we picked ours up, the father of the current owner of the manufacturing plant in this very small extreme southeast corner of Kansas was the first to build this type of trailer which is now used throughout the United States. We hook on and start back the way we came.

Wine, Apple Cider, Civil War reenactments, and an oversized back hoe. Next time we'll take the truck camper and spend more time in this interesting side of Kansas.

The moon is beautiful.  I thought tonight is the full moon, but my calendar says tomorrow.  I don’t know how it could get any bigger.  According to the almanac, May is the Full Flower Moon.

Speaking of full flowers, the cemetery across from Stull UMC is beautiful.  Peonies are in full bloom as are a few Iris.

I tried planting a perennial at my Dad’s grave site.   It was mowed off almost immediately.  They are hard to get started.  Cemetery mowers don’t like to mess.  I should try again because I feel real flowers are the best tribute.

Our neighbor, Chip, brought by left over plants from their Butterfly Garden Sale at Monarch Watch including several containers of fennel.  Believe it or not, fennel is an excellent butterfly plant.  We planted some last year and at one point we found a bunch of caterpillars on it.  It’s a plain plant so many would think it’s a weed, but wouldn’t a butterfly host plant be a thoughtful gravesite plant. 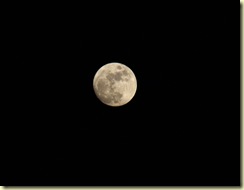 Preview of things to come

This is an exciting time of year.  The garden and fruit trees are entering their teenage period.  Growing quickly, showing maturity and developing potential.

The weather forecast with thunderheads building on the horizon cause frequent checks of the radar.  Not that anything can be done about Mom Nature.  It just seems important to know.

Tonight while watching this develop 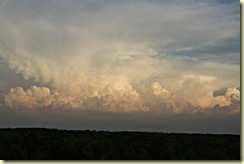 I walked around the yard marveling at our peaches, grapes, corn among other young plant families and hoped everything works out for them and us. 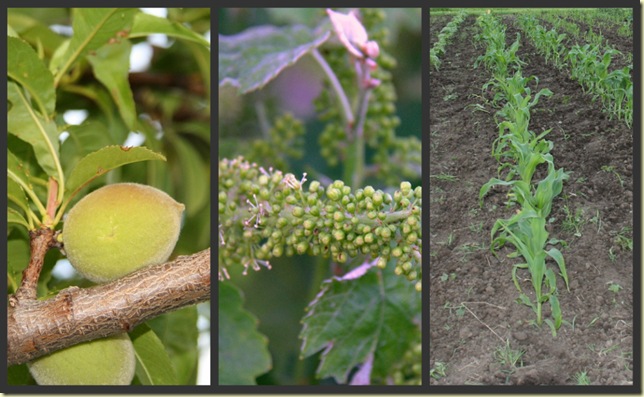 Birthdays are always fun. Today we had fun, good food, and plenty of drama. Can't beat a birthday like that. 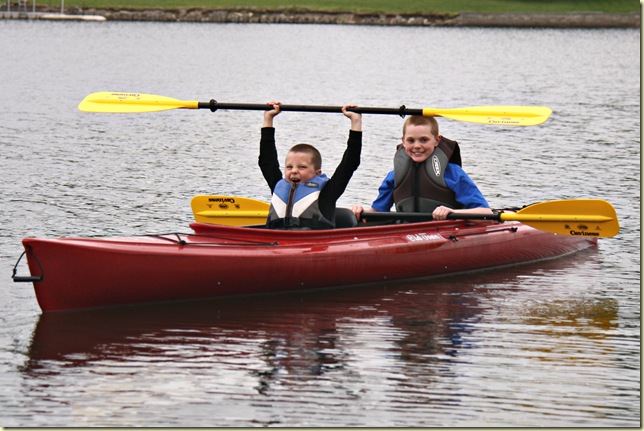