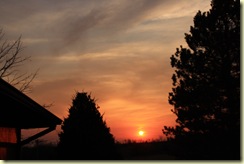 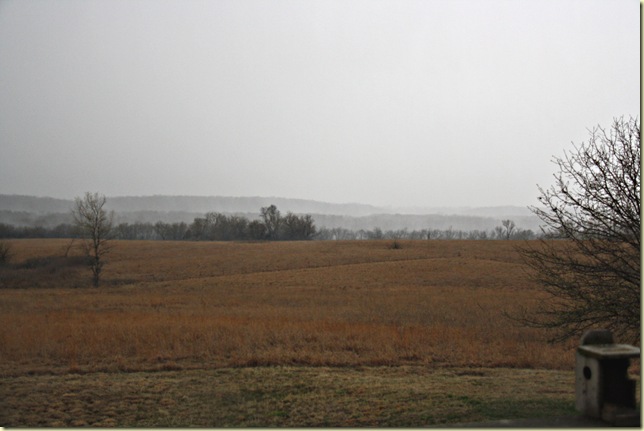 This sight has caused various reactions over the years.  If there is hay down in the field, disappointment.  If there are clothes on the line, extreme quickness.  If there is a tornado watch, peeking out from the basement.

We made the decision to delay planting garden until this moves through.  Too many times, we’ve had seeds washed out because our garden sits on a slight slope.

Today, this sight means I’m going to work on my taxes.

The Lawrence Public Library is sponsoring a four-part discussion on western novels.  I signed up for all.  Dan and Kim are splitting.

The first book is The Ox-Bow Incident, published in 1940.  It is proving to be an excellent novel.  It’s pretty much a given by the end of the first chapter what is going to happen.  I guess the picture on the cover of the book is also a clue.  It’s the story leading up to and after the “Incident” is what makes the book so powerful.

It is short, but hard for me to read.  The word pattern throws me off.  I ‘m not sure if it is the style of writing then, or more likely, the author using it to bring the reader into the story.  I’m looking forward to the discussion tomorrow night..

There is a movie with Henry Fonda also.  It has good reviews.  My name is on the list. 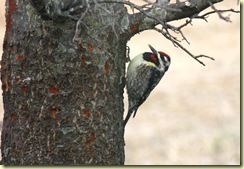 This beauty was spotted this morning outside the bedroom window aggressively pecking at our pin oak tree.   I started snapping away.  Apparently it did not like it’s picture taken because all of a sudden, it turned and flew right into the window.  Off it went, unhurt.

Last fall we decided we needed to get ourselves in a position to market more of our own hay.  At least the prairie hay.  The weak link in this idea was a truck that could maneuver around in a hay field and trailer.

That is how it came to be that I found, on Craig’s List,  a 3/4 ton Ford diesel truck in Bolivar, Tennessee.  Granted it was only a 2001 and high mileage, but diesels do last a long time and the price was right.

Trouble is, we now are both retired and another vehicle to tag & pay taxes on was more than we needed.

So, up went our beloved Roadtrek onto, what else, Craig’s List.  In three weeks, we turned her over to an excited owner.  By that time, I had been scanning (what else?) Craig’s List for popup pickup campers.

It just happened one was for sale in Payson, Arizona, just up the way from where we were headed to visit our friends.  As you know by now, we made the deal and we now are back into the roadtrip business.

The NorthStar brand 850 is probably considered a middle of the line pickup camper.  However, many of the extras in the more expensive models make them heavier. We are after lite and tight.  It has the main features we like such as  queen size bed, cassette toilet  and solar collector.

It is 8 1/2 feet long which fits our truck with only a two foot overhang in the back.

The shower is small, but we used it three or four times on our trip & it worked well.

The popup consists of unlatching and cranking up from the inside.  We timed ourselves, from start to sitting down inside with a beer, it is one minute flat.

We didn’t have any trouble keeping warm which concerned me.  Although, the coldest was only in the low 40s, the furnace worked well.  It might be noiser at night than the Roadtrek.  We swear by Tylenol PMs so who knows?

We are pleased with how it’s all turned out.  Only one problem, we still don’t have the hay trailer.

I’m looking on Craig’s list, though.  There is one in Oklahoma.