I’ve written about these trees before here.  I pointed out settlers used them as field boundaries, often in conjunction with stone fences.  They are easy to start and persistent perhaps because they are native North American trees and grow easily on harsh prairies.

The name hedgerow was not new to the settlers.    There are hedgerows in Europe over 1,000 years old.  Troops fighting after D Day found themselves constantly lost in the large, often overgrown hedgerows of Normandy.

So hedgerows were not new to settlers, but the Osage Orange might have been.  It is a brutal tree with its thorns, but flexible and strong.   Native Americans used its wood to make their bows.  Their logs make excellent fence posts.

Most likely the “hedge” nickname for Osage Orange came from it’s use in the hedgerow, which would have been a familiar word among the European settlers.

The field where the trunk load of wood is located is surrounded on three sides by a hedgerow (you can see it in the background of the picture).  For over 25 years, Dan, our kids and I have worked on clearing out the row to expand the hay field.  It seems lower hedge tree limbs die out as the tree grows.  Also, the dropped fruit, known to me as hedgeapple, easily start new trees along the rows, constantly increasing the width of the row.

A lot of heat has and continues to be generated from that hedgerow.  Many historical hedgerows have been removed by modern farming.  As long as we have a say, this one will remain.

Is this tacky or smart?

Those who have kept in touch with us know we now have a four-wheel drive pickup.

Yesterday, it was time to replenish the wood stack.   It appears we are going to need a little “stove backup” for a while longer.

So, do you think we started up the precious truck to get the wood?

No…why should we when we have this jewel with studded front tires that goes anywhere.

Maybe just a bit tacky.  However, if I wouldn’t have put this picture up, who would have known! 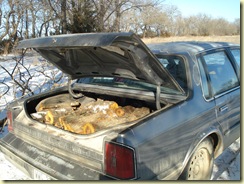 Breakfast on a snow day

Yesterday was another snow day for eastern Kansas.  Folks in the mountains of Colorado and the northeastern states would probably shake their heads at the fact that we let a little ice and snow shut a day down.  It did, though.  Many church services were cancelled.

What did we do?  Fired up the wood stove and cooked breakfast.  It was delicious.

Then we spent the day watching the Olympics and working a little on our basement remodel project.  It was a good day. 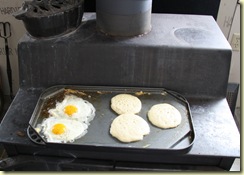