Believe it or not, my dream job was being a rural mail carrier.  How lucky am I that I actually was able to work at a job I enjoyed.  I wrote several years ago about how I came about thinking being a rural carrier was a good occupation.  Check here if interested.

There are other jobs that would be fun, perhaps not for an entire working career, but something to try.

It was Linda and Bonny’s  comments about the blender that made me think of a job I’ve always thought intriguing.  Demonstrating products.   Like those almost magician-like hawkers often selling a food related item which are a staple at the State Fair.  They seem to enjoy their work while working their crowd.

They have their appliance, all necessary ingredients, sides to show off their end product and usually a skillfully used sharp knife.  Then, in the end,  the knife is thrown in on the deal.

The all time best demonstrator is one I saw several years ago at the “World of Woodworking” show in Kansas City.  Actually, all the people there are good, although we did see a lady cut herself rather badly demonstrating a drill cutter once.

The best demonstrator, though, was a man who was selling a matte cutting device for framing pictures.  Within a 10 or 15 minute time period, he cut multiple mats, including oval and circles.  He made little bird and animal cut outs on the mattes as well as double and even triple mattes.  It was truly amazing.  He definitely had the biggest audience at the show.

If I do decide to try this second occupation, I probably should settle on samples at Sam’s.  Less likely to embarrass myself.

Things I want but don’t need…

I should clarify these are not big things.  Who wouldn’t want a vacation home on the beach, etc.  These are smaller, although not inexpensive, items that would just be fun to have.

First, the IPhone.  I’ve been telling myself for several years that I do not need a fancy phone.  Kim got one for her work, though,  and I only played with it for a short time to get hooked.  But, my old standby does fine.

Second, a blender.  Not a regular blender, but one that makes flour out of wheat,  grinds whole apples and oranges and makes sand out of rocks.  They are the real deal.   But, I  have a blender that works OK and friends that will grind my wheat.

Third, a Route 44 Cherry Limeade from Sonic.  Those things are absolutely the very best drink ever made.  And, if you get there during the Happy Hour 2 – 4 pm they are half price.   I really don’t need one of these big sweet drinks—on the other hand, I could have a diet one which are about as good…. 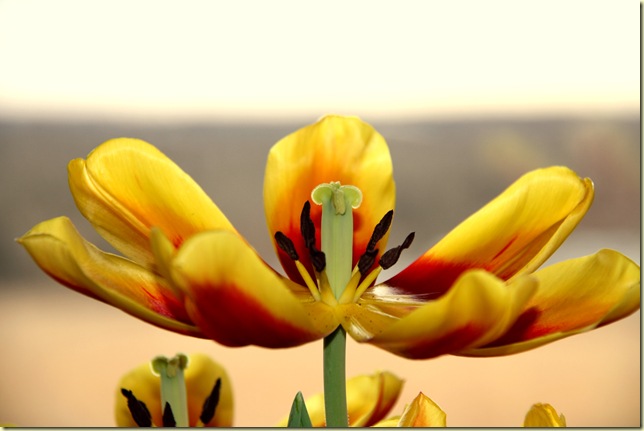 Tulips are beautiful with age.  I hope we all are in the eyes of our loved ones.

Sunday evening things weren’t quite right.  Sure enough, I got the “stuff” that is going around.

For about 24 hours, I laid around feeling just plain sick.  Then, yesterday afternoon sometime, the fog lifted.

I hate being sick.    I’m grumpy, non communicative,  not a good patient and want to be left alone.

So, today, when all energy is back, and food sounds good, it makes me realize how much I appreciate the attitude of my friends who have to deal with chronic illness.  Most of the time they probably feel much worse than I did yesterday.  And, they do it with class and very little complaining.  Nothing like what Dan heard out of me yesterday.

Those who read this and are dealing with health issues, you are my heroes.