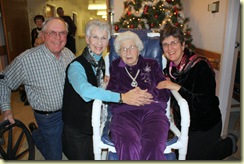 Mom had a good time at the party tonight.  She smiled the whole evening.

Talking about delicious So easy too

1 cup margarine (I use butter)

Melt the chocolate chips and spread over the top

of the peanut butter mixture.

People and their cell phones

Notice I didn’t say, “Young people” although they most often get the bad rap about cell phone usage.  This is about someone around my age.

I know this happens to everyone.  Not wanting to forget anything,  I’m pushing the cart up and down each isle.  There is someone else who is doing the same thing, only from the opposite direction.  Consequently, I meet this person face to face in each isle.  Usually, everyone is intent in finding their things, so it’s no big deal.

Today,  the person I keep meeting is talking on the cell phone while shopping.  She has someone with her pushing the cart so it is grab and throw groceries while obviously talking about someone.  Each time I meet her, I overhear a snippet of conversation.

I know the person is immature (cereal isle), self absorbed (baking goods isle), is either getting a divorce or about to (chips and crackers isle).  First, I couldn’t believe she is shopping while talking on the phone and second, that she is saying such negative things about another person in a public place (the store was busy).

There is talk of banning cell phone usage while driving.  I would add “grocery cart” to that also.