Really.  I’ve just been too busy to sit down and write a post that has any kind of social redeeming value.

You know, I could write about watching the grandkids two days a week.  Then there was the cooking involved with the 4th weekend.  I’m off to visit Mom at Chapman in the morning.  And, promised my friends at the post office I would bring bierrocks tomorrow so I’m in the process of that now.

I will have a post about the wild blackberries in our pasture in my head.  Check back tomorrow night.  Maybe I’ll have some picked and will give you a taste.  Well, visually anyway. 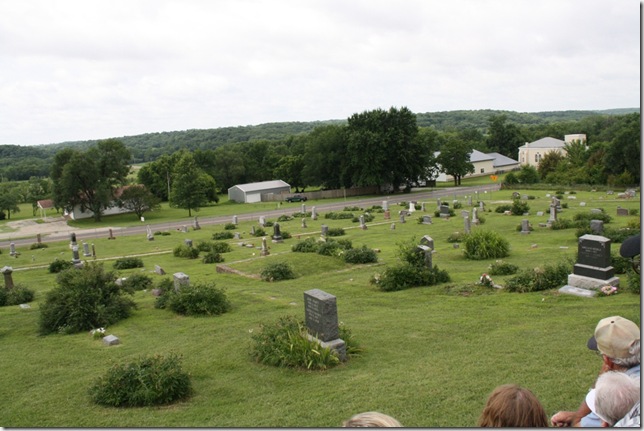 A cemetery tour might seem an unusual beginning of a 4th of July celebration. On the other hand, it is a place of history, a documentation of the opportunities and sacrifices our freedom offers.

A cloudy rather dreary morning greets an upbeat group gathered on the hayrack for the ride around and through the Stull cemetery tombstones. Our tour guide Iona Spencer has researched the lives of over 4,000 people in the Stull and Lecompton communities. Elsie Middleton also works on the project and provides color commentary for the tour.

The first grave marker we encounter is Wittich, 1832-1910. An unfortunate family name spelling most likely is the reason for persistent stories of this cemetery being haunted. A KU professor, bed sheets and fraternity initiations fuel the fire. Over the years, Iona Spencer said she frequently brought coffee and cookies to Douglas County Sheriff deputies guarding the cemetery at Halloween and the 13th of the month. Razing the original church high on the hill has deterred this activity in recent years.

Tombstone names are familiar to most on the wagon. Many families emigrated from Germany in the mid 1800s because of the unrest in Europe as well as opportunities to find cheap land here in the newly organized Kansas territory.

There seem to be many old tombstones with birth and death dates indicating children. One baby is buried with its mother, both having died during childbirth. Diphtheria was often a deadly early disease for children. One child died because of a prairie fire. His older brother was able to climb the rock fence to escape.

Adults died before their time. A roll over lumber wagon, family feud over equipment and as well as hard work involved in living off the earth—all stories affecting the lives and deaths of local residents.

Perils of early homesteading often found children with one parent other than their own. One father raised two sets of stepchildren plus his own.

The common European homeland gave the community a connection and often children found their partners within the community. An assumption for someone new in the community is, “always assume everyone is related when talking about anyone.” A custom in Germany, which carried over to early America, was if a family were all girls, the eldest would retain the family name when married.

All too soon, our 4th of July cemetery tour is over. It was a great opportunity to hear Stull community history by looking at family burial plots. We appreciate Iona and Elsie’s work in chronicling the past and, in doing so, gathering stories for future.

From the Citizen Journalism Academy