This is a crazy video of Adam. What I am actually doing is experimenting with the built in menu on the FLIP camera. There is an option to post a video directly to a blog. I wondered how it would work out. Actually, this camera is made for this kind of use. The file size is small, it downloads quickly and it includes simple instructions.

There is one thing anyone purchasing this little toy should know. It does not work with older computers. On my home computer, I have to use the camera like a thumb drive and download the videos in that manner. If you go online and type in FLIP error message, there are many who are very upset with spending the money on this gadget and finding it will work work on their computer.

If you are willing to work around this one fault or you have a newer computer, I highly recommend this camera.

What special activity can three boys do for spring break?

How about hanging out with Nana, riding bikes and searching for heart rocks.  It seemed to fill the bill for our local grandboys. 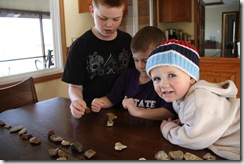 Here are the results of our rock search which took place in decorative landscaping around the yard.  I thought the boys did a good job of finding interesting specimens. 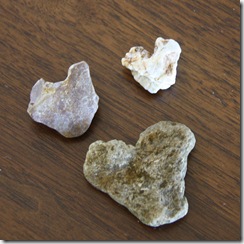 Diamonds and Rust by Joan Baez

Joan Baez still has it at 68 years old.  It was a wonderful concert.

It was Dan’s idea to go.  When I came by at noon, he said, “Let’s go.”  I thought it would be sold out.  We managed two tickets in very good seats at Liberty Hall in Lawrence.

It’s late so won’t write any more right now.  The song Diamonds and Rust is left.  Although not one of her early songs, I think it is my favorite. 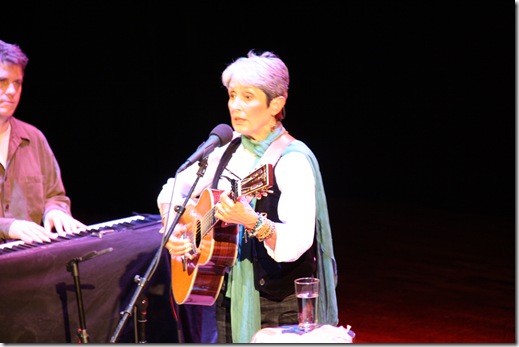 Smoke Gets In Your Eyes

Hit play on the left while you read this!

Smoke Gets In Your Eyes is originally a show tune by Jerome Kern and lyricist Otto Harbach for the show Roberta. According to Wikipedia this song has been covered approximately 35 times. For me, there is no other version but the Platters recorded in 1959, going to Number one on the charts. Someplace I still have the well worn album.

This song was a sure thing at sock hops, proms, and any other dance while I was in high school from 1960-1964. It’s one of those songs that, while playing, I can close my eyes and really feel those memories.

My real reason for thinking of this song is literally, I feel like I have smoke in my eyes. Someone is burning their pasture tonight and the smoke is coming right our way. I’ve been smelling it for several hours. Hopefully, they are about finished.

It is worth the smell to listen to this old favorite again. Enjoy.