Up until this year, GSCG (Grandparents Suggested Christmas Gifts) only included plug and play games. They were fun enough bringing back the old Pac-Man’s ferocious appetite.

With the oldest grandson now almost ten, our kids finally gave in to requests for the newer handheld games for Christmas. Thus, my GSCP this year included games for various brands of electronic devices.

It didn’t take long to figure out the popular games. They were sold out. I started getting up early in the morning to check web sites for availability. The last one arrived two days before Christmas.

Christmas Day dawned with five little heads bending over their new electronic toys. Even the adults enjoyed bowling a line. Our little four-year-old punching her brother instead of his “Me” in their boxing match prompted a quick turnoff.

I’ll be honest. I became quite intrigued with the whole thing. So, guess what Santa brought me—an electronic toy with two games: Brain Age (Train Your Brain in Minutes a Day!) and My Fun Facts.

As the name implies, Brain Age has interesting little tests, which are supposed to determine whether your brain is healthy. As an example, there is a list and you are to say the color of print of a color name as quickly as you can. There are about ten basic arithmetic problems but they require close attention to what is being asked. There is a list of around 30 words that you are to memorize in three minutes and then have one minute to write as many as possible.

This game is billed as brain training. It says mine is 56. And, it says my brain is only “walking.” Perhaps these game manufacturers are on to something. Especially if they convince adults we need one of them as we get older to keep the brain healthy. 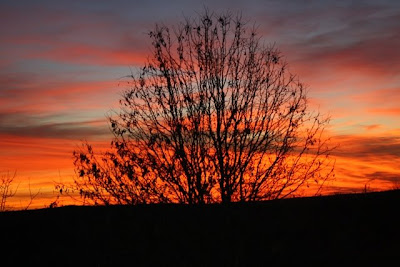 The sun went down on 2008 with a blaze of glory tonight and the year is grinding down as I post this at 11:30 Central time. Actually, the ball has probably dropped in New York.

I am feeling a bit sorry for myself. This morning I woke sounding like a sick rooster--sort of croaking. By the time I finished the route, the voice was completely gone. Certainly no parties for me tonight. You've got to talk to celebrate.

So, I decided to figure out how to post audio to the blog. Sometimes it would be fun to have that ability

Here is my first audio post. Dan and I enjoy Brody Buster, a Lawrence blues musician. He was a youth prodigy on the harmonica and appeared on Jay Lano when he was 12.

Please join in my little New Years blog celebration by listening to one of his band's classics at the top on the left.
Posted by Linda at 10:48 PM 2 comments:

Christmas morning was good. We were able to spend a little over an hour with Mom. My brother came by so we had a good visit. Mom seemed to know it was a special day.

Our trip west went well. Not many travelers on Christmas Day. The Kansas Highway Patrol certainly had a presence, though. We counted four between Chapman and Salina. They weren’t wearing Santa hats either. (Several years ago we received a warning on Christmas Day when we were traveling between Colorado and Kansas. The officer wore a Santa hat.)

The house smelled of fresh baked bread and ham when we arrived. The kids were excited about their Santa gifts but anxious to see what we had in our bags too.

After eating until stuffed because everything was so good, we opened gifts. The big gifts this Christmas were electronic games. We were no exception with our new little Nintendo DS Lite. One of our gifts was Fun Facts for your Daily Life. It came with Brain Age, Train Your Brain in Minutes a Day. Ended up the adults enjoyed these games as much as the kids did theirs. Well, actually, the Brain Age one is rather frustrating. I won’t say what age my brain is.

Doug & Drue bought Wii for their family. We bowled and boxed. It is a crazy deal. Unless you have tried it, you wouldn’t believe it. The new electronics are sophisticated.

Our weekend went by fast. It was time to hit the road back home all too soon. Certainly encountered more traffic on Sunday. I think everyone had the same schedule. The Corolla did well on its first Colorado trip. We averaged 34.34 mpg with a top of 39 mpg on the tank coming home. We drove 70 mph. With gas prices down, we weren’t as careful with our speed.

We headed for the mountains for Christmas this year.

Our Colorado family were gracious hosts. The family created memories with laughter and games.

More about our trip tomorrow evening. Tonight I am a bit road weary.
Posted by Linda at 10:32 PM No comments: