Shopping is not my favorite pastime. At least just window shopping. On the other hand, I do love to find bargains.

Since today was a workday for me, hitting the 4:00 am sales was out of the question. So, I shopped online last night until midnight and was up again at 5:30 am to get a couple more things. Most places had free shipping.

I think I did pretty well. I still have a couple things to buy, but I am hoping Kim and I will be able to spend a few hours in down town Lawrence. It is a great place to get the spirit of the holiday
Posted by Linda at 8:27 PM 1 comment:

“What’s most important is often too easily forgotten”

In our family Thanksgiving Day is traditionally simple. It is a time for food and fellowship. The aromas of turkey, fresh baked bread and pumpkin pie draw us to the kitchen and finally the table.

During our short time of gratitude, we are all thankful for family and health. We overeat, talk too loud and laugh often.

Thanksgiving 1943 was not full of fun and fellowship for the late Alex Haley, celebrated author of the 1976 book and later miniseries Roots. He was a cook on the USS Murzim. At the end of a day spent preparing a Thanksgiving meal for everyone on the ship, he made his way out for a breath of open fresh air.

In an article entitled “Thank You” published November 21, 1982 in Parade Magazine Harley writes it was at that time, he got to thinking about Thanksgivings of his past. He searched in his mind of a way to apply Thanksgiving to the short day he had left.

“It must have taken me a half-hour to sense that maybe some key to an answer could result from reversing the word “Thanksgiving…to “Giving Thanks.” Haley wrote. “After awhile, like a dawn’s brightening, a further answer did come—that there were people to thank, people who had done so much for me that I could never possibly repay them. The embarrassing truth was I’d always just accepted what they’d done, taken all of it for granted. Not one time had I ever bothered to express to any of them so much as a simple, sincere, “Thank you.”

In the article, Haley tells of sitting down with paper and memories. He wrote heart felt notes to his Father, Grandmother and other special people in his life.

I kept Haley’s article and thought of it as I wrote letters to my parents over the years. In addition to the usual family news, I included a thank you for deeds done in the present or past. By thanking for answers to questions, I conveyed the value of their opinions. My father has passed and my mother is elderly. I sincerely hope I was able to communicate my appreciation for their continuing influence in my life.

In early December 1992, while our daughter was a junior in college, I was the subject of a paper for her sociology class. She wrote how I had helped the family and her in ways I did not realize. She gave me a copy of the paper and I will cherish it always. I need to tell her again how much it means to me.

My friend Sue sends the most meaningful thank you notes. She uses words like “beautiful, warm, and fun” when she writes or emails about coming into our home for a meal or party. How nice to receive that confirmation.

As Thanksgiving and the Holiday season approach, rereading Alex Haley’s 25-year-old article has inspired me again to say thank you by writing a short three-sentence note or better yet, a letter. As he said, it is a simple, meaningful gift. Most importantly, I should keep in mind something Haley felt so strongly about communicating that he had it printed across the bottom of his stationery. It read,

"Find the good and praise it"

Twas the night before Thanksgiving 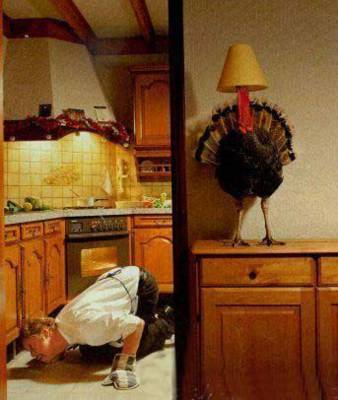 'Twas the night before Thanksgiving