Wouldn’t you know? I can’t find a recipe. The search has been fun, though.

Recipe cards are like old pictures or clothes. They bring back good memories. Here and there are a few retro ones that look good but a bit out of fashion.

Personally, as a kid, a meal would not be complete without Jello containing upside down half pears, fruit cocktail, or strawberries and bananas. I see the layered Jello salad recipes containing pistachio pudding and Cool Whip but pull out the cabbage salad with crunchy noodles and fresh vegetable salads that are popular with us now.


My Mom always made sweet rolls as well as regular rolls. The regular rolls were made by putting three little balls in each hole of a cupcake tin. She only did that during the Holidays. Bread machines have simplified that chore. We still have cloverleaves, though.

Over the years, Mr. Turkey has made his presence at our dinners dressed formally to casual, the only recipe is how long to fix him up. In the fifties, mom placed the bird on the table whole with stuffing inside. When I began having the meals, he was baked early, sliced with defatted juice poured over. Recently, our kids have deep fried or smoked him. Personally, I don’t care how he is dressed, just so he comes.

Well, wouldn’t you know, here is that dog-eared, stained recipe card filed under “Christmas.” No wonder I couldn’t find it, that makes too much sense.

Scalloped corn and oysters—no holiday family dinner is complete without this dish. It could be a developed taste because newer members are slightly less enthusiastic. Something about finding a whole oyster hiding in corn. This recipe is my grandmother’s. I am sure she told it to my Mom, though, as grandma never used recipe cards. Enjoy!

Scalloped Corn and Oysters
3 cups soda cracker crumbs
1 t salt
¼ t pepper
1 stick melted butter (not oleo)
Mix above ingredients together & put 1 ½ cups in the bottom of an 8 x 8 glass dish. Over this arrange drained oysters (two cans if you really like oysters) reserving the liquid. Add another light layer of crumbs then whole corn (frozen is better than canned). Over all pour 1 cup milk and oyster liquid (add additional milk if you can’t see liquid around the edges). Sprinkle a few crumbs over the top. Bake 350 25-30 minutes.
Posted by Linda at 2:37 PM 3 comments:

There are several things going on this weekend and I needed cookies. That is why I decided to make a batch of Monster Cookies last night. I didn't get to bed until 12:30 am. I posted the crazy huge recipe over at the Rural Carriers blog because some of them wanted the recipe. If you have never made them, here is the recipe--good luck!!
Posted by Linda at 10:40 PM 2 comments:

Peg, on her blog Prairie Post writes about a friendly dog that comes by her house regularly. Finally, she ties a note to its collar. Click here for the "rest of the story."
Posted by Linda at 10:14 PM No comments:

Just to set the record straight up front, I did not see Ty Pennington.

The call came Thursday morning from Sherry. Labor coordinators for the Extreme Makeover home at Chapman need trim carpenters Saturday morning. We respond immediately. Dan as the craftsman and me, the flunky.

Six a.m. finds Paul and Janice, Dan and I bundled against the upper 30 degree temperatures signing a form saying we will not hold “ABC liable if killed or photographed.” Well, maybe it isn't quite that, but at least I saw those four words. Since each volunteer is asked to bring their own equipment, a line of vehicles carrying trimmer’s tools is the first clue there are more than a few ready to go to work.

Disappointment at not being a part of the activities in the house quickly fades when the cold morning generates a continuous line of workers and program professionals at Janice and my responsibility, the coffee canteen. A few questions as we serve up our strong brew keeps us informed on the progress just a few feet away. 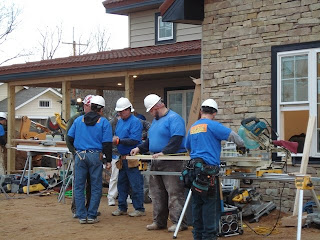 A minimum of 36 trim carpenters are working in the house. A quick tour while the coffee is perking, confirms enough miter saws outside to keep the air nailers popping inside. Groups are working on separate projects such as hanging cabinets, stairs, crown molding, base, hanging doors, mantle and tongue and groove planks on the ceiling , our trimmers’ project. In addition, there are tile layers and granite countertop people working along side. Projects that might take two weeks to complete are finished in less than eight hours. 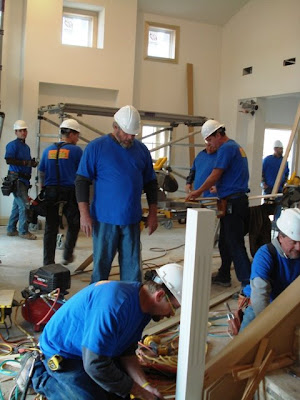 Meanwhile there are earth movers and skid loaders working on the yard. Around noon a line of trucks appears with trees, bushes and plants. By late afternoon when we leave, most are planted. Landscapers are working on a cobblestone path and what looks like a water fall. 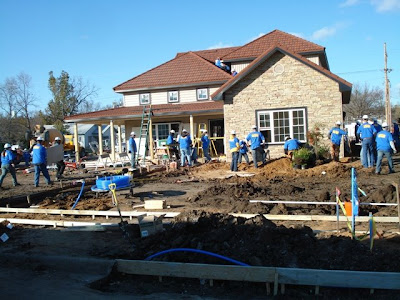 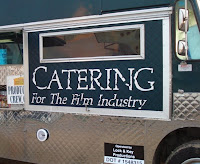 Meanwhile, our coffee duties are replaced by serving 350 volunteers lunch cooked in a moble kitchen specializing in catering the film industry. While professional cooks expertly prepared, seasoned, and carefully presented the food, the hard working, dust covered workers could probably have eaten twice as much. When a well known hot dog manufacturer set up their grill for freebies a little later, they had a brisk business.

For at least two hours during the middle of all this activity, Louis Lamp, originally from the Seattle area, now at Fort Riley, stood on a earth berm and played his violin. When asked if he saw the camera on him, he said, “Yes, when I played, ‘Over the Rainbow’.”

Here are my observations about our day on Extreme Makeover, Home Edition.

This Emmy award-winning program funnels a lot of money and good works into the community in production of their show.

While the scenes we see in the final cuts are pretty much staged, everything actually does happen as depicted at some point.

People volunteer time and equipment. The owner of CW Concrete, Junction City, said, “All trucks, including pumper concrete trucks, fuel, and finish equipment and crews are furnished with no charge.” Major contractors and suppliers do the work and supply materials only for the advertising. In my area, P T’s Coffee Company of Topeka donated 50 lbs of fresh roasted coffee perking 24 hours a day.

Bruce Taylor, a Chapman resident, said the following about the city of Chapman and surrounding area. “They asked for three thousand volunteers and five thousand responded. They put out a call for twenty additional framing carpenters when they fell behind on Thursday and forty showed up.” Many feel because of the community support, additional projects have been undertaken around town, including a new tornado shelter and help with other damaged homes and a church.

Everyone seems caught up in the excitement surrounding the house and other projects. Despite the cold, windy day, Chapman was basking in the warm spotlight on Saturday. My feeling is this proud, hardworking community desires it.

They will “move the bus” on Tuesday. Chapman schools will let out early. The Tutwiler family will find a beautiful, well-built home. It is a big day for the city with a lot of Pride. We are excited to have been a part of it.

The Extreme Makeover Home Edition (Chapman) will appear as a two-hour special during sweeps week January 25, 2009.
Posted by Linda at 5:16 PM 8 comments: