Chip of Monarch Watch stopped by this evening for a quick visit. He told me about the new blog and their intent to post up-to-date information. For a direct link, click here.

Also, Monarchs were featured on an ABC news program last October. Don't miss the video on the upper right side of the page. The Monarch footage from Mexico is unbelievable. Also, there is a slide show of beautiful Monarch pictures.
Posted by Linda at 10:28 PM 1 comment:

Have you ever been asked your most embarrassing moment without time to think about it? In other words, the first thing that pops into your head.

We all have something which inevitably comes to mind. I wrote about one back in my secretarial days here.

In reality, life is full of little embarrassing moments. Fleeting times of flushed face. Things quickly forgotten. Earlier this week I had one of those

First, I have to say that when the roads are bad with snow or ice, I drive a Beater, or in other words a 1987 Oldsmobile. It’s a jewel. Everything works except the radio. It gets me around the route in fine shape.

It wasn’t entirely the car’s fault. We knew the muffler was loose. It wasn’t too bad and Dan had the parts. I didn’t anticipate two things. First, the trash truck making its rounds when the roads were soft creating deep ruts. Second, the temperature dropping and those ruts freezing.

After about the third time my Sweetness high centered on a frozen mud rut, the muffler fell off. Now I am delivering mail sounding like an old dump truck. It was near the end of the route. However, I did have to make one stop at a residence to pick up outgoing packages. I no sooner pulled up when the customer came running out to see who was taking their stuff. They saw it was me, looked a big bewildered at my Rickster (the car has several names) and waved.

Only slightly red faced, I waved back and roared away.
Posted by Linda at 9:47 PM 2 comments:

The 8 Wonders of Kansas sponsored by the Kansas Sampler Foundation were unveiled by Gov. Kathleen Sebelius today. I believe they are a good representation of Kansas. However, my suggestion, located right here in Douglas County, did not make the list.

History indicates the pink boulders were recognized in northeastern Kansas by the French explorer, De Bourgmont in the early 1700s. Their origin was a mystery until 1868 when Louis Agassiz visited the area. He was a controversial scientist who popularized the concept of a recent Ice Age in earth history. He correctly identified the pink boulders as erratics transported from as far north as the now Minnesota region by an ice sheet.

The following is a quote from Glacial Geology of the Kansas City Vicinity:

“Along the edge of the ice lobes, glacial lakes were dammed in pre-existing valleys, and meltwater floods eroded spillway channels around the ice margin. All these features serve to identify the effects of glaciation in the region. During the late Independence glaciation, ice lobes advanced farther south and locally blocked the Kansas and Missouri River valleys east and west of Kansas City. Numerous meltwater spillways were eroded and glacial lakes filled and overflowed along the maximum limit of glaciation. These spillways are preserved as valleys parallel to and south of the Kansas and Missouri river valleys. Some of these spillways were later filled with sediment and others remain open valleys today. A good example is the Wakarusa River valley in Shawnee and Douglas counties, Kansas.”

From the quote, one would conclude the large number of red granite rocks in the area were brought here by the glacier and then dropped as it melted. They are beautiful, all sizes and very heavy.

The Wildlife and Parks hunting area in the upper region of Clinton Lake is available for hiking. On the northern hills of the river valley, Minnesota granite rocks, protrude from the grasslands. They may appear flat in the grass but may be massive in size underneath. The rocks located near the bridge on the north end of Massachusetts Street in Lawrence were harvested in this area. 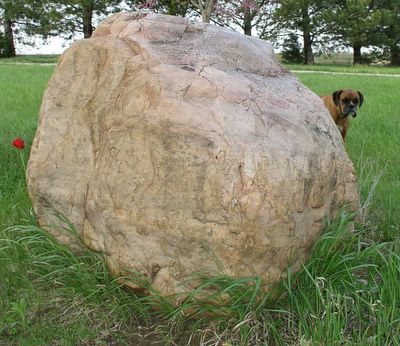 Skye, the boxer, indicates the size of the rock.

Granite rocks would not make Kansas a tourist hot spot. On the other hand, how they were transported and left here is amazing. I would consider it a wonder of Kansas.
Posted by Linda at 8:58 PM 3 comments: