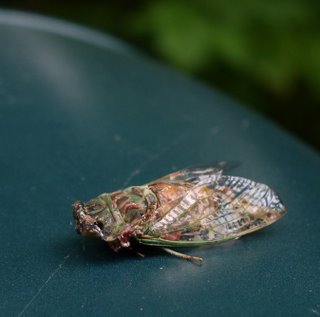 The past two evenings the cicadas have been hard to ignore and I remembered I had caught a picture of one on a mailbox last year about this time I never got around to posting.
According to James Mason of the Great Plains Nature Center in Wichita, Cicadas are of the insect order Homoptera, which includes the Aphid. There are 160 species of cicada in North America, north of Mexico. The little guy in my picture is a Dog Day Cicada or Tibicen pruinosa (Say). The University of Michigan has a site with the sounds of cicadas. I am sure we have many species in Kansas, but this the one that I love most to hear. How loud are cicadas? According to Mr. Mason some have been measured at 100 decibels at 20 yards away, which is loud enough to be heard over a lawnmower!

The Cicadas borrow underground and feed on tree root sap for a period of one to seventeen years. The last time the Great Plains seventeen year cicada made its appearance was 1998, so we will look for it again in 2015. As a side note to that, we had a lovable Beagle at that time named Lucy. Lucy loved to eat Cicadas and there were so many that year that she stood by our trees and ate them off like corn on the cob. She had a habit of overeating anyway, and that year she ended up being a sick puppy!

I urge you to click on the Nature Center link above. The Cicada is a fascinating insect. For me, though, the sound of the Cicada is an outdoor feel good late summer sound.

Pack or not to pack

I am a “lurker” on a forum of owners of the same brand of RV that we purchased. I have found it to be helpful with general maintenance, and understanding how to use the features properly. It’s always good to learn from others mistakes.

Recently, there was quite a disruption on the forum. There were cross words, accusing words, and generally a lot of pros and cons. What topic would cause a discussion of this sort in a group of fun-loving people? Guns

It all started when the question entered for discussion was how to protect oneself in an RV. The question came up because of the shooting in a Wal Mart parking lot in Cedar City, Utah. It seems the family was parked for the night and a man came to their door, refusing to leave and starting choking the husband, which resulted in the intruder being shot and killed with a shotgun. So, the question was probably valid to be entered in the discussion. What resulted, though, was a barrage of entries for and against the use of guns.

Kansas recently passed a concealed carry law. A majority of States also have this law. For some reason, I did not know the extent of the feelings on this subject. If this forum is any indication, they are strong. The following are some of the points made:

In 2003, the most recent year for which data is available, there were 30,136 gun deaths in the US with 56% of that number being suicides and 40% homicides.
Handguns account for only one-third of all firearms owned in the US, but account for two-thirds of the deaths.
A gun in the home (or RV) increases the risk of homicide of the occupant by 3 times.
Violence spreads violence

I would rather be tried by 12 than carried by 6
Crime is down in the US because of the concealed carry laws
It’s the Second Amendment
The show of a firearm is enough to discourage
If the terrorists march, the non-gun owners will start looking for neighbors with guns
It’s always good to be on a level playing field

I printed off some of the posts and showed them to Dan, a NRA member in good standing, and it prompted a informative discussion. I appreciate his input in this matter as I respect his thought processes. I have given it a couple of days of “mail route thinking” also. What is my decision? Dan and I have decided that if the State of Kansas offers a class in gun safety in order to get a concealed carry permit, we would sign up. Education is always good. I feel certain, however, you won’t find me packing.

28 big bales on approximately 25 acres. That is down at least 10 bales from last year on this field. We don't expect our other areas to do much better.

I did a little checking to see how the weather of July, 2006, compared. We received 2.44 inches of rain in July. I checked past years precipitation for Douglas county from the Department of Agronomy, KSU. It appears we are down in July compared to the past two years, but not as much as expected. I am certainly no expert, but 20 days total without any rain and only two significant rainfalls with neither over an inch might be a factor. Also, check the following table of the temperatures in July. The grass did not have a chance. 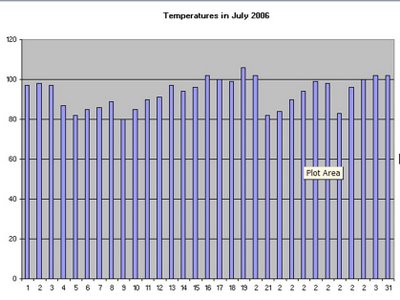 I have a question. How do the mail carriers in southern Arizona, Utah or Nevada do it? The temperatures in these places are regularly over 110. I know, it’s a dry heat, but working regularly in high temperatures would have to take its toll.

I had a couple of things I wanted to write about, but it will have to wait. It was a hot day in Kansas.
Posted by Linda at 10:14 PM 3 comments: 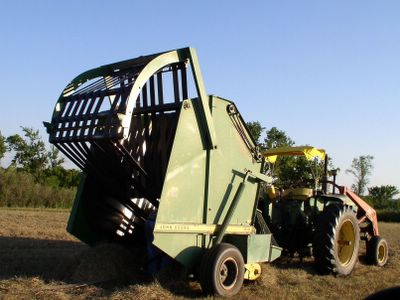 This has been a hay weekend. Yesterday Dan mowed and I swathed. Today, Dan let me stay in the cool house.

It took longer than he expected to rake what he mowed so he was just starting to roll up the hay when I arrived this afternoon with Gatorade and a snack.

I knew it wasn't good when I pulled into the field. Rolling up hay doesn't mean the tractor is setting still and the dump rack is up in the air and Dan's behind is showing out the back (it's back there, trust me). The baler had broke a belt and he was in the process of digging hay out.

These are heavy rubber belts and it would seem a disaster when one breaks; however, it only took about 30 minutes to fix the belt with metal lacing . I was glad I was there to run after tools and help thread the belt back into the machine. I gave him the power drink, fresh water, and he was on his way. The humidity is low enough that he will probably keep going until he gets what is down wrapped up.