The weather radio just went off for the second time so I decided to check the radar. Sure enough, there is a massive storm moving our way. After three days of wind and several weeks of sunshine, rain would be a blessing.

When we were in Salina last weekend, the combines were running. I am sure my brother is hitting it hard with the possibility of a storm. While rain will help the row crops, the ripe wheat would be better off in the bin.

We sing about the “waves of grain.” The KU students put their hands in the air and rock back and forth to simulate the wave (I am not educated in KU ways, but I always thought that was what they were doing). Today, as I went by a ripe wheat field, I thought it not only looked, but also sounded like ocean waves—the small ones that lap up to the shore.

I know this sounds crazy, but the next time you go by a ripe wheat field, turn off the vehicle, close your eyes and listen.

There goes the weather radio for the third time—this might be a long night.
Posted by Linda at 11:35 PM No comments:

We gave our gift this evening in Lawrence.  I had a grocery list so after a burrito at my favorite place Chipotles, we did the shopping.

This isn’t much of a post, because the combination of working in the heat today and giving blood, I am totally shot (tired).  So with that, sooooo long.
Posted by Linda at 9:29 PM No comments:

Help, my car is dying!

When I purchased my pickup for the mail route, I had some reservations since it was bigger. It quickly became my all time favorite mail vehicle. There is less dust because it sits high off the road, I can get all kinds of packages in the back, and the mail is easier to move around. It is not four-wheel drive, so I have a “backup” vehicle not only for bad roads, but also for use when the pickup has mechanical problems, which is why I have been driving the backup for several weeks. The pickup is in the shop and doesn’t seem to be a priority with the mechanics.

My backup vehicle is a 1988 Oldsmobile with close to 190,000 miles. I don’t pay much for these backup vehicles because they aren't driven too often. Unfortunately, with the daily use, the Olds has developed a problem. When the temperature gets above 90, it dies about 50 times a day. (I am not exaggerating here) Thankfully, it starts right back up. Dan is a very good diagnostician but he hasn’t been able to identify anything. (He changed the fuel filter) It doesn’t look like I will see my truck anytime in the near future so if anyone has a guess why that car keeps dying on me, please let me know. It’s too hot to be frustrated. 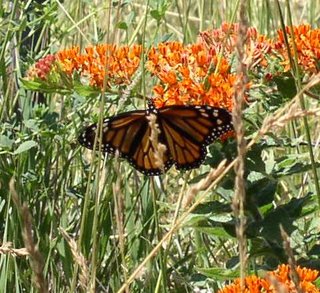 I was traveling down the road on the route & just happened to spot a Monarch. I screeched to a halt and took this from my car window. Too bad about the grass right in front of its body. 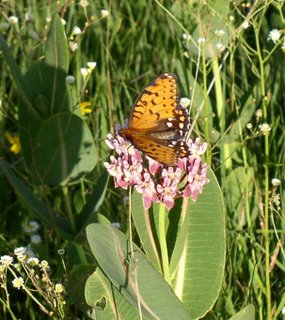 This Regal Fritillary was on a milk weed in our pasture this evening.
Posted by Linda at 7:39 PM No comments: 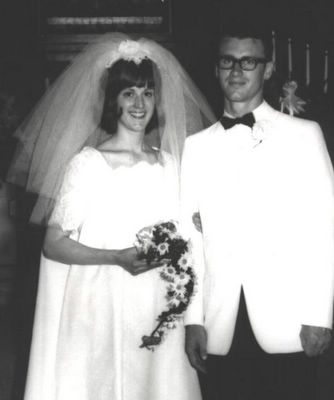 Last July 4th we were in Breckenridge, Colorado, for a family outing. While there we attended their art festival in progress. We admired Steve Malavolta's puzzles and his unique placement of types of wood and its grain to make puzzles.

To our surprise, he had a booth at the Smoky Hill River Festival! We again admired his handiwork and ultimately decided to buy a small example of his work. He does not have a web page, but his work and his story is in the Scroll Saw magazine. 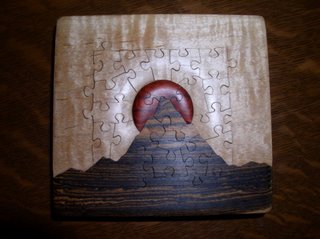 My desired art was spotted, but not purchased. I needed to think about the investment a bit longer. It is so beautiful that I told Dan I think it would make me feel happy each time I looked at it. Isn't that what art should do?

The reason I felt I could wait is that I see the artist at least once a week because she lives about a mile from the post office. She is nationally known but to us she is just Diane. DL Lawrence Studio web page has examples of her silk art posted.

By the way, Steve Malavolta said he did not think he would go back to Breckenridge this year because they raised the price of a booth. He was at Salina, though!