What can I say --I love my birthday. Maybe its because when I was a kid there was a group of five girls that had a party each year on our birthdays so it was always a fun day or maybe its because I just like an excuse to celebrate.

Kim, Marc, Aaron & Adam came to help make sure the day was fun. They started by buying my lunch at Free State Brewery in Lawrence. Normally, we would have spent time on Mass. Street shopping, but we decided to go to the marble factory instead.

One of Dan's gifts to me was Marci Penner's book The Kansas Guidebook for explorers. I was looking through it this morning when I noticed the little writeup about the Moon Marble Company in Bonner Springs. Since Bonner is only about 20 minutes east of Lawrence, we took off for there after our delicious meal at Free State. I had called ahead and found out they were having a marble making demonstration at 2:00 and we were on the bleachers and ready at that time.

Bruce Breslow is the owner of the Moon Marble Co. His location started out to be a custom cabinet making business. He made a few wooden toys on the side and searched out a place to buy marbles for the games, thus the beginning of his interest in marbles. It was his wife's gift of a hot head torch as a Holiday gift that provided the heat for his creativity. He showed us the first marbles he made. At that time he was very proud of the little globs of glass. 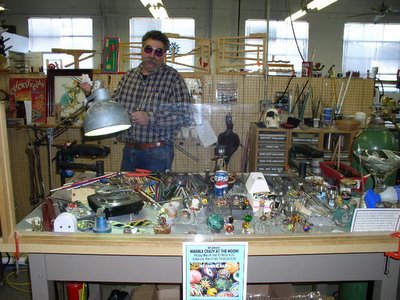 This is Bruce and his work table. As with artists, he had many items used in his craft within reach which made the table appear cluttered. The burner was behind the Pepsi can. Glass must be heated to 1,100 degrees to start melting. He accomplished this with the torch. As he put the glass tubes in the hot blue flame, the flame turned red. He explained this is the same principle as meteorites flying through space leaving a red trail. 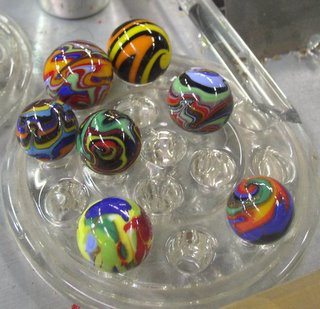 He put the marble immediately
in the kiln so I don't have a
picture of it, but these are
examples of others he made
with the same process. 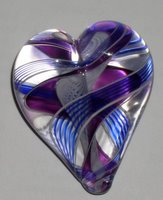 Dan's birthday present to me. 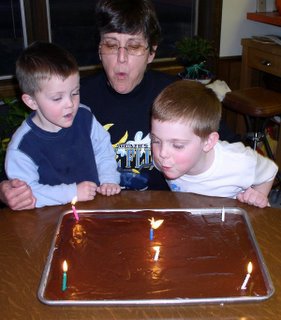 The end to a perfect birthday!
Posted by Linda at 8:34 PM 1 comment: 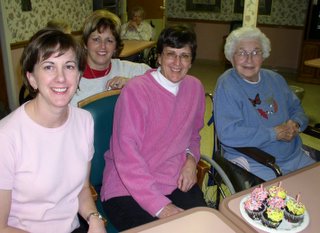 In front are the three generations of women. And, we are all even years--Mom is 90, I am 60 and Kim is 35. Sue is behind giving support.

A special thank you to my sister-in-law, Ruth, (middle back) who checks on mom faithfully and purchased a very meaningful birthday gift for me from Mom I think Mom had a good time. That is what is important.
Posted by Linda at 9:33 PM 2 comments:

This is your lucky day

was the KHP trooper's parting words tonight. He was right.

My friend Sue and I drove the 160 miles round trip to visit Mom tonight. Since Sue is also a rural mail carrier as well as a long time friend, we never run out of things to talk about. And, talking we were when I looked past her and onto the other lane of the highway and saw the trooper. I also, immediately looked down at the speed odometer and I saw something in the neighborhood of 85 mph. I said, "Sue, slow down!" Sue said, "why?" I said, "we're toast."

First thought through my head was how much is this going to cost. We kept looking behind us but saw nothing so we decided he was sneezing or something and missed us. We had continued our conversation when we both spotted him along side of us. We both uttered, " (word deleted)" and tried to look innocent and Sue kept it right at the speed limit. He just stayed there--no signal to pull over. We thought maybe he was trying to scare us.

Just when we thought all was well, on went the lights. "(word deleted)" When he approached the car, he ask if we had a reason to be going 87 mph! There was a moment of silence before Sue said meekly, "We were going to a birthday party." What can you say?

He went back to his car, probably to check Sue's checking account balance, credit rating, annual income, what kind of toothpaste she uses or what ever they do back there for an eternity. All of a sudden he jumped out of his car, practically threw Sue's stuff back in the window and informed us of our lucky day. He took off with his lights flashing. Someone or something else needed his attention. It was our lucky day--17 miles over--that would have been a bundle.

We really were going to a birthday party--mine. We had a little party with Mom--it was fun. I will post a picture tomorrow night.
Posted by Linda at 10:47 PM No comments: 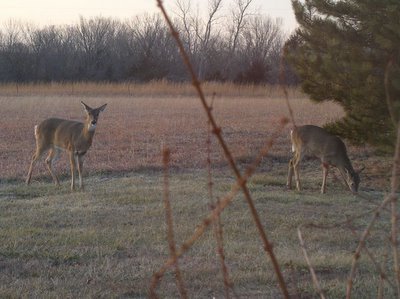 I have posted pictures before taken from our bedroom window. This is the first during the daylight.

I happened to walk into the bedroom and saw the deer feeding on the bird seed. I immediately hit the floor and crawled out of the room. I was able to get my camera and crawl back in with the deer still enjoying their snack. The season was open when this picture was taken but they obviously don't feel threatened here. 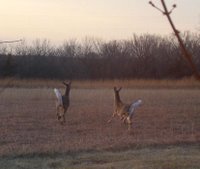 I think this is what "high tail it" means.

This has been a beautiful weekend. I should have waited with my temperature chart until the end of the month as I think we've had two more days at or near 60 degrees. I did a little rough figuring and it looks like the average temperature for December was 39.3 degrees and the average, not including the past two days, of January is 50.1. As I write these temperatures, it almost seems impossible. I should go back and refigure, although I checked it twice.

I did have a bit of spring fever today as I repotted several plants and then filled 90 small peet pots to start spring flowers. I had Zinnia seeds on hand so I planted two per pot in 40 of them. This is early so there is a danger of the plant getting rank before it is safe to set them out. Even though we're having warm temperatures, there is still several months of winter left. Here in Kansas the latter part of April is fairly safe. I have a window with lots of sun, but experience has shown I will have to set up a grow light. Trouble is, I have the grow light on the infamous upside down tomato. (FYI tomatoes are still setting on and there is one almost ripe)

I plan to try my hand at starting petunias in the rest of the pots. Years ago (I won't say how many as she reads this and I don't want her to feel old) Kim started petunias in pots for a 4-H flower project. She had success. Actually, as I remember, she won a purple ribbon at the county fair on a demonstration of how she did it. I might call our local Henry's Plant Farm and see if I can purchase fresh seeds from Marsha. Speaking of Henry's, I just checked their web site and it is very nice. This nursery started as a Mom and Pop business to supplement their farming operation.

I have lots of wildflower seeds I purchased last fall. We have heard and read conflicting information on when to start them. We heard they should put out so they freeze. The package says to plant in the spring. We want to sow them in with the native grass in our little nature walk area behind the house. Today we talked about burning off the grass early (March) and planting them then. That way they wouldn't have to compete with the grass for sun until they sprouted. However, they might not get a hard freeze if we wait until that late. Guess we could just put them in the freezer. Hmmm, maybe someone reading this will know. Maybe I should just ask Marsha at the Plant farm.
Posted by Linda at 8:00 PM No comments: