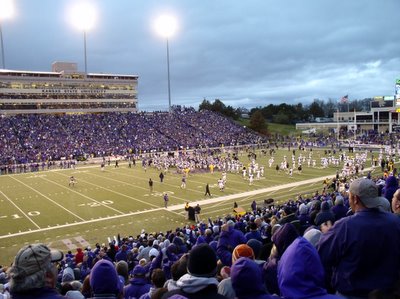 Scene immediately following the last play of the game.

Special tribute to Coach Snyder after the game. The players and Snyder family surrounded the small platform. There was a short introduction by
KSU President Wefald and then remarks by Coach Snyder as shown on the jumbotron. 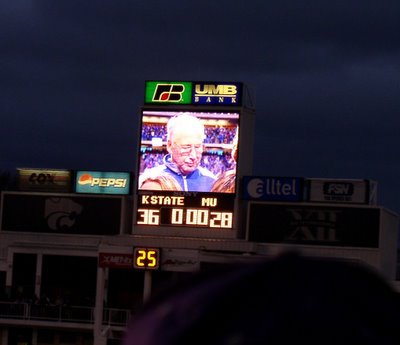 Coach was preparing to say his final farewell to the fans. The stadium remained almost entirely full. Those present sensed the team staged the stunning comeback in the second half for the Coach.

Thanks for the ride, Coach.

We are headed to Manhattan soon for the KSU Wildcats final game of the season and Bill Snyder's final game of his career. We want to get there early so we don't miss any of the pregame ceremonies. They are renaming the stadium in his honor, The Bill Snyder Family Stadium.

The fact that Coach Snyder wanted to put "Family" in the name says so much about his life. He said in the news conference announcing his retirement that he had not been a good husband and father because of his commitment to coaching. I suspect otherwise. A person who is passionate about a job often is passionate about all parts of life.

Coach has received much praise the past few days. In some ways it reminds me of a funeral. It's hard to believe someone was that good. However, one thing everyone agrees on is Snyder's ability to coach. No matter how the Cats were playing the first half, there was always that knowledge it would be straightened out at the half. He is a hall of fame coach.

We were "sort of" in on the ground level of Coach Snyder's career. Our daughter enrolled at KSU in the fall of 1989. Our son two years later. Doug and our son-in-law, Marc, worked for the KSU football program in the video department. They both would agree that the Coach was a firm boss but fair. It was an opportunity they will never forget.

This on-line video is a very nice tribute to Coach Snyder: http://streamload.com/KansasStateCat/Tribute.wmv

Also, The Rattler wrote a fitting tribute. There are and will be more. He is personally a person who shuns media, and in doing that creates many stories from others.

This time of year, driving at night or early in the morning carries a high risk. We know this from experience because our family has had at least six encounters. I have hit three in my mail truck, Dan two, and Kim one.

We live in an area with an exceptionally dense population. The other night we were on the road. I told Dan I would watch one side and he the other. All of a sudden he jammed on the brakes just in time to miss the doe running across the road in front of us. Thankfully, there was only one as we would have hit one tagging behind.

One deer encounter involved a buck that flat out ran into the side of my truck. So, to be totally correct, my score would be Linda: 2 Deer 1. Those buck have only one thing on their mind and it isn't looking where they are going unless it is at a doe in front of them.

We were very lucky last winter, actually right about this time. We were on our way to Kansas City on Hwy 10. Dan was in the middle of a sentence when a deer hit the side of the van, flew off and hit the car behind us breaking their front window. Had that deer hit just a little sooner, it could have come right in and hit Dan. Thankfully, no one in the car behind was hurt.

Watch for the shining eyes on the side of the road--more than likely there will be a deer in front of you in a flash.
Posted by Linda at 9:21 PM 1 comment: 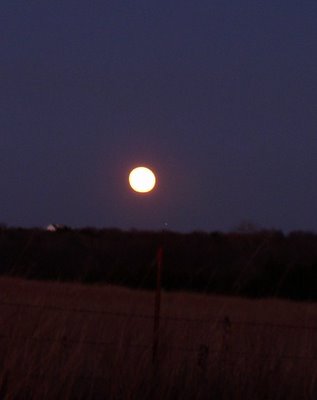 It was a long day today on the route and it was dark when I left the post office. I was about a mile down the road when Dan called on the cell to ask if I had noticed the moon.

I immediately turned off the main road and to try for a picture. There is something truly beautiful about a rising moon on a cold crisp night. No wonder songs, poems and stories are written attempting to capture the feeling and sight.
Moonlight and Roses
Moon River
Blue Moon
Paper Moon
Harvest Moon (Neil Young)
Dark Side of the Moon (Pink Floyd
Tennessee Moon (Neil Diamond)
Any others?
Posted by Linda at 9:49 PM 1 comment:

This one has been around 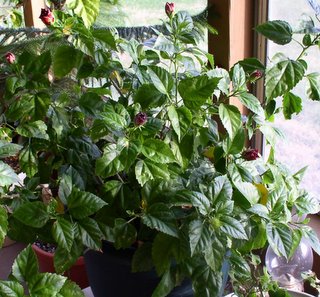 Is it me or are there fewer plants in homes now, at least in prominent places. The new silk plants look good and are definitely cleaner. I still prefer real plants. Last spring, Kim helped me clean up after my plants. They do seem to make work, especially when they put sticky stuff all over the floor. However, after a summer outside, they all made it back in the house.

Everyone has at least one houseplant with a story. As a kid, I visited my aunt's house often. She had a beautiful double flowered Hibiscus plant. It filled the whole corner of her livingroom. I admired it as it always seemed to be blooming. My Mom took a cut off that plant and started this one. She gave it to me when she and Dad started traveling after retirement. 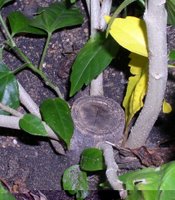 For a long time I would prune it back to a bare stump each year. Then two years ago, it became root bound or just tired and died--or at least I thought so. I cut it off even with the soil, repotted and loosed the roots, and set it down stairs, watering when I thought about it. Sure enough, up came shoots from the roots.

I mentioned this plant might be older than I am, but actually the original plant would be older. This one would still be a senior citizen, though.
Posted by Linda at 10:12 PM No comments:

The house is cleaner, but still not where I want it to be. It has been a good weekend, though. The weather was perfect.

There is a satisfaction to cleaning. It might be the act of putting possessions in order or the feeling of comfort when finished. I suspect both are innate human needs because most people work at keeping their lives clean and organized. Maybe we just feel better that way. At any rate, I did make progress, although not completely done.

I spent time with my house plants this weekend. They needed attention after "summer camp." As I cleaned dead leaves and pruned a bit, I thought of how I had acquired them. Houseplants can be like that--gifts from relatives, cuts from friends or even inherited. I will share a couple stories this week. There is one that could be my age!
Posted by Linda at 10:49 PM No comments: