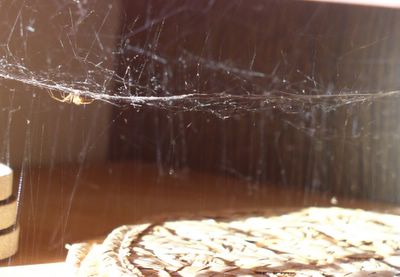 Today I am staying home and cleaning--do you think I need to?
Picture by Linda
Posted by Linda at 9:04 AM 2 comments: 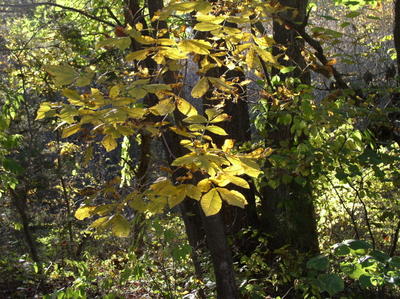 One of the more beautiful aspects of fall colors is the contrast of sunlight and shadow through the changing leaves. I have tried numerous times to capture this digitally, but generally it is disappointing. In the picture above I set my Olympus Camedia C-4000 on aperture priority mode and then lowered to -0.7. It is OK, but not exactly how I saw it. I invested in a white light filter with a nonglare coating as recommended by a digital photography magazine. I have experimented with it some, but I haven't had time to shoot a bunch of bracketed pictures to compare.

I also wondered about setting the camera to a center focus. I suppose I could use the workshop, but I would rather learn to take good pictures without alteration. I'll keep trying but suggestions are definitely welcome.
Posted by Linda at 10:12 PM 2 comments:

I had several requests for seeds from the wild poinsettia. Before we left last weekend I harvested some of the little seeds. They looked green, so I thought perhaps it would be best to let them dry on the counter while we were gone.

When we returned on Monday, the counter was littered with debris as well as the floor. At first I thought it was a mouse, but then I discovered the seeds had dried and popped out of their shell. It must have been quite a force. They are very tiny seeds, but I now see how they have propagated so readily.

So, tomorrow, the seeds are in the mail.
Posted by Linda at 10:46 PM No comments:

Yesterday I mentioned we ate at the Katy Roundhouse. Today on the mail route I began thinking about my small connection with the Katy.

My brother and I were fairly young, I am guessing I was six or seven so he would have been around eleven. Our mom took us to the Junction City depot to ride the Katy to Skiddy. Our cousins lived there so I am sure Mom thought would be an adventure and she would not have to drive too far to pick up us.

We rode on a passenger car. Unfortunately, I don't remember much about the car, but I do remember the Conductor. He was dressed nicely with a flat topped hat. When the train started moving he made his rounds collecting tickets. He talked to us about the train and I remember feeling very special. The train stopped at the Skiddy grain elevator just to let us off. It continued on and in doing so , went right past my cousins front yard.

I checked another Katy web site and found the Neosho branch began in Junction City in 1868. Railroad expansion was becoming an important "race" into the new territories. The Katy line from Junction City met the southern line at Sedalia then on to Moberly to join the North Missouri Railroad (Wabash) thus making the connection to St. Louis. Little did my brother and I know we were riding history.

Trains have always had a romance about them--just think about the many train songs.
Posted by Linda at 9:27 PM 1 comment:

October 2007
It's been fun over the years celebrating Oktoberfest in Missouri wine country, usually with a group. This year it was Dan and I making the adventure. (Pictures at the bottom, but they make more sense if you read first)

We started by enjoying a visit and lunch with friends near Gardner, Kansas. Cheryl recently had back surgery. She is doing amazingly well.

From southern Kansas City, we headed east. We had no schedule, only that we intended to drive the Herrman Missouri Wine Trail on Saturday. Somewhere between Blue Springs and Booneville, Dan brought up shore lunches. The more we thought about it the better it sounded. An exit off I 70 at Booneville, a visit to the local grocery store and we were ready for a shore lunch of pond fed catfish.

We ended up not bringing the bikes. However, we knew there was a picnic area down by the Katy Trail at Rocheport that would be a perfect spot for our fish fry. We had everything out to start frying, only there was one problem. The mosquitoes were relentless. We grabbed up our stuff and took off.

I remembered a well-maintained rest stop near the Herrman exit. It was nearly 8:00 pm when we arrived. As if prepared just for us, there was a well-lit picnic table. We fired up our outdoor propane burner, poured a generous amount of peanut oil in the skillet, rolled the catfish pieces in breading and fried up a shore lunch right there. Delicious.

We boondocked and arrived in Herrman yesterday morning by 9:00 am. After a stop at the candy shop (chocolate with a sweeter wine, of course) we took off south of town for the Adam Puchita vineyard. We were one of the first there. We sampled and purchased just one bottle. I think it was too early as they have excellent wines.

Back to town we drove up to Stone Hill. The view is spectacular from this winery. It is always a beautiful stop.

On the way out of town, we passed Hermannhof Winery. It was already crowded. It is a popular destination for young people—too loud for us.

By this time, it was about time for the KSU/KU game. We decided to head for our favorite, Robllers. We ended up listening to the game under a shade tree, thankful for a bottle (or two) of their good wine to ease our pain.

The entertainment for the afternoon was a musician from St. Louis named Bob. He played every song (this is Bob singing & playing) I have ever loved—at least it seemed so by that time. We decided to pass on the other vineyards on the Trail and enjoy Bob's music.

Bob packed up at 5:00 pm and so did we. Dan had taken a little rest, so he was in fine shape to drive. We headed east intending to cross the Missouri River at Washington, the next bridge after Herrman. We happened on to a very pleasant surprise there. Washington has a park with a picnic tables overlooking the river. We once again fired up our skillet, threw in a couple hamburgers. Instant mashed potatoes and steamed broccoli rounded out our throw together meal. There was no wine served.

We watched the sun set, sending its colors across the river. Local citizens gathered for this event and to watch the boats and jet skiers on the river. I am sure it is especially beautiful in the summer when the sun is further north and would set on the river.

We ate, crossed the Washington bridge and headed we did not know where. Once again things worked out as we ended up at the Graham Cave State Park. It was pitch dark when we arrived, but campers were sitting around bright campfires making it a welcome place to park the Roadtrek for the night. And, a place we plan to return to walk the trails and check out the cave at another time.

This morning, we rose early, showered and took off for Columbia First Christian Church to hear our niece, Rev. Amy Kay, conduct the morning service. Afterward, a quick lunch and visit, then Amy Kay was off to the CROP Walk and Dane to put Sebastian down for his nap.

Five o’clock found us home and unloaded. I’ll say it again, we had fun!


Missouri is not a stranger to us. We have floated on the North Fork of the White River at least seven or eight times. Our kids loved to water ski on Table Rock and even parts of Lake of the Ozarks. The water is clear and there is less wind.

Wine Country is a yearly trip. We visited Branson once. Many of our friends enjoy trips there, but we bypass the crowds for more rural areas.

The road tax must be less because we nearly always find good gas prices. This time we filled up in Washington, MO, for $2.37 a gallon.

Missouri is a tourist destination. They are proud of their attractions. We know because there are billboards informing travelers. Perhaps a few too many. However, unlike Kansas, we did not see a billboard advertising false teeth or reversing a vasectomy.

Almost without fail, we find the people in the rural areas of Missouri friendly and accommodating. They are laid back and seem to enjoy slowing life down a bit.

And, slow it down we did last weekend.

Sunday morning we were up and on the road to Hermann by 9:00. The first stop in Hermann was the visitor's center and the chocolate shop nearby. (I like red wine and chocolate). We decided to tour Adam Puchta Winery first. We bought two bottles of their excellent wine and brought out the cheese and crackers.

From there we traveled 7 miles east to Bias Winery. We always enjoy this stop as the vines almost surround the visitors center. They had a comfortable easy going atmosphere with a DJ playing oldies.

Our favorite Robller winery was next on the list. We bought several cases then brought out the chocolate to eat with their excellent red wine. They had a "jam band" which I enjoyed. At this point it was time to throw Frisbee and work off a bit of the vino.

Finally, it was back to town to the Hermannhof Winery. In our past visits we have not spent much time here. It is predominately young people and it gets loud. However, at 5:00 on a Sunday afternoon, it was perfect. They had an accordion player and there was Poka going on. We laughed a lot as the Poka is fun to watch--wish I could dance it as well as some of those old timers. 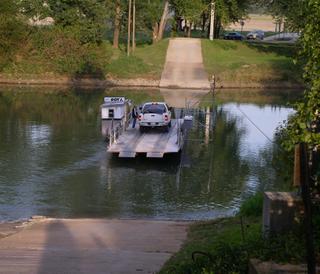 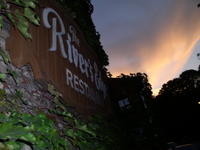 Then we headed to the Riverside Restaurant. It is a short drive south of Hermann, but for some reason seem to get lost. This time, it was only a short detour before we drove right to the rivers edge--litterly. The pavement dies into the river and there is a ferry. We had ribs and steaks--and coffee! This restaurant has an interesting story. It is owned by a former rock musician (didn't recognize the name) and he has a recording studio upstairs. They had framed copies of newspaper and magazine articles about the restaurant on the walls. Also very delicious.

After a night mobile backpacking in the Hermann City Park and Campground and the rest at the motel, we headed to the most scenic of all, Stone Hill winery. It is perched at the top of a hill overlooking the city. It was one of the leading wine making companies before Prohibition. They have a tour of their wine cellars showing current production as well as how it was in the late 1800s. Note: they grew mushrooms in their wine cellars during Prohibition. 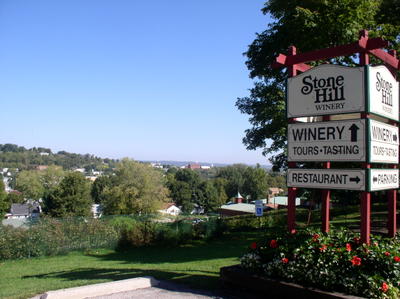 The scene was beauiful this morning and will be even better as the leaves turn.