Viceroy Butterflies on the move 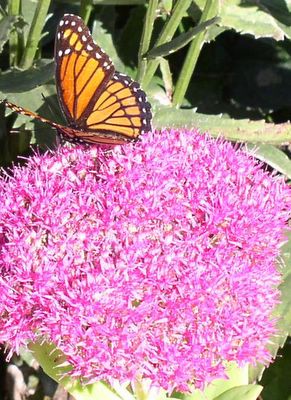 The Viceroy butterflies were on the move yesterday. As I drove down the road, they would fly in front of me. I am afraid I hit some of them. According to my reference book, the Viceroy tends to hold its wings in this manner when basking in the sun. It was a little cooler today and maybe it needed to get warmed up.
Picture by Linda
Posted by Linda at 8:08 AM No comments:

I have discovered at least two more types of sunflowers. Trouble is, none of my wildflower books nor the internet have much information on the different varieties. I might have one of them identified, but hesitate to post until I'm sure. I read that many sunflowers cross to make hybrids and I am wondering if that has happened. However, it seems different types are in large groups. I would like to find a book only on sunflowers. Will have to do some research. 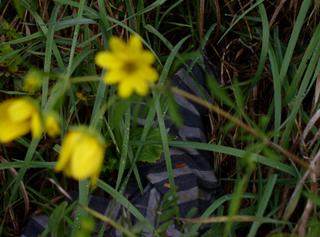 When I checked my pictures tonight, I discovered something interesting and mysterious. I had my camera on the most extreme closeup/micro setting but miss calculated distance so instead of sharp flowers, I got background. Check it out! It looks to be some sort of material. Is it a missing link to an unsolved crime? I didn't notice it at the time. I would not make a good CSI investigator, though. I can't remember for sure where I took the picture. 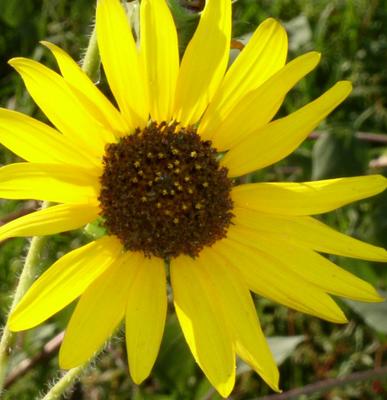 The sunflowers are beautiful this year. Maybe they are always this pretty, but I forget from year to year. I noticed on the route today there are two distinctive types blooming right now.

This is the common sunflower. It is the Kansas State flower for a reason--it is all over the place. Archaeologists believe that Native Americans may have cultivated sunflowers as early as 3000 B.C. 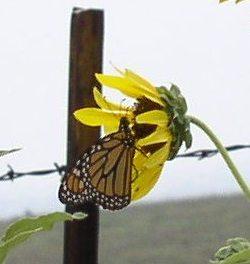 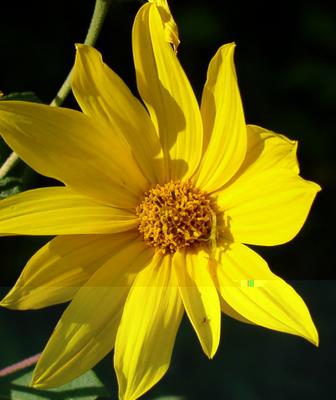 This is the Woodland sunflower. According to Jim Mason this variety is an preannual whereas the common sunflower is an annual. There are as many as 11 species of sunflower in Kansas. It might be fun to try to find an example of each type.

First, over the years I have learned when I am delivering mail and there is a farmer coming down the road, I get out of the way. Farmers own the road, usually by virtue of the size of machinery/vehicle they are driving.

So that older people could get around easily at the fair, there were little electric scooters for rent. I am sure the manufacturer had a tent and what better advertising. Anyway, you match one of those scooters with a retired farmer and clear the way. At one point, I was walking to an area that had a big open door. Just as I was about to turn and walk into the building, out flew one of those scooters without looking either way. Seated on it was an older obviously rural gentleman. We began to observe this group of scooter drivers. Things don’t change.

Also, our little neighbor gal who competed in the pedal tractor pull placed third in her age group, received a big trophy and is going to Mitchell, South Dakota for the national competition. Her momma said she was “pumped” to win another trophy!

Finally, an observation about the men and women who man the booths that have something to sell everyone should have. I am intrigued with these super sales people and always have to listen to at least one presentation. This time I choose a man selling knives. He was a total expert in handling those knives. He used slow dramatic gestures and anything he put the knives to, cut like cheese. Tomatoes fell in perfect slices. Of course, you could cut rope, most anything with little or no effort. He did his demo expertly and was to the point where he needed to give a fairly large number of people gathered the extra push to buy. I thought the pitch was perfect for his husband & wife audience. It was: “This knife is only $40. If your wife is not worth $40, you might as well send her down the road packing.” You could just see those men reaching for their wallets. Take a lesson Dale Carnegie.

Ah, that’s what I’ll do when I retire. Only, should I sell knives, pots & pans, super dusting covers, rubber brooms, dryer marbles, or little airplanes that boomerang back?
Posted by Linda at 7:03 PM No comments: 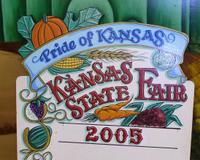 It was a beautiful day to be at the fair--slightly cloudy and cool. On the way to Hutchinson, we stopped by BETO Junction (its a crossroads named for the four closest towns) for one of their signature cinnamon rolls. Dan and I split one and we were both full.

We were parked and in the fair by 11:00. We first headed to the Pride of Kansas building. I wanted to see some of the 4-H exhibits before it was too crowded. This was not the building 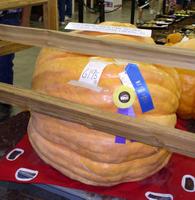 for 4-H but it did house the states largest pumpkin. It's hard to read, but it was 619 pounds!

We had a delicious lunch of hot beef sandwiches (pride of Kansas beef) and then on to the other exhibit halls with booths by Kansas businesses. It was way too crowded there besides it was time for the kid's tractor pull. We had no idea this was such a huge event. The arena was overflowing. I think each county had a preliminary event to pick those who pulled at the fair. We immediately spotted our neighbor. It was a bonus that we saw her peddle her tractor 21 feet. 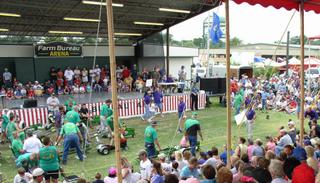 Dan then went his own way to look at machinery and I finally found the 4-H entries. The exhibits showed a lot of talent and work. I especially enjoyed photography, entomology, woodworking and sewing (yes, young people still use sewing machines).

We met back up because it was time for the pig races. We had to walk back to the spot we entered the fair grounds. It was worth it to see the baby pigs race. We were talking about the pigs on the way home, wondering how long it took to train them to start from gates just like the race horses and run around a little track. Of course they have treats at the end, but still it was hilarious to watch. My pictures didn't turn out because the camera focused on the people in front of me instead of the pigs--too bad.

Then back to the other side of the grounds to check out the animal barns. Rabbits and chickens, birds, ducks and geese must be popular 4-H projects now. The large building was full of cages and every rooster was crowing--it seemed that way, anyway. From there it was the veterinary building. We just missed seeing a new calf born. It was still wet from birth and had not managed to get up yet. There was a huge sow about to give birth. If we would have hung around for a hour or so I bet we would have seen baby pigs--nothing cuter. 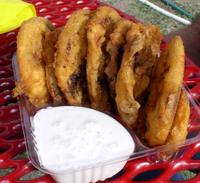 We only did one "ride" and that was a sky lift that took us up over the whole fair. We couldn't believe how crowded it looked from that vantage point. We were tired and it was nice to sit.

The next building housed the horses. We watched a western reining class for a while. By then it was almost 6:00 and past time for us to head for home. On the way out of the fair, we stopped at a little food stand that was selling fried green tomatoes. Wow, delicious but a little greasy. Oh well, it's the fair.