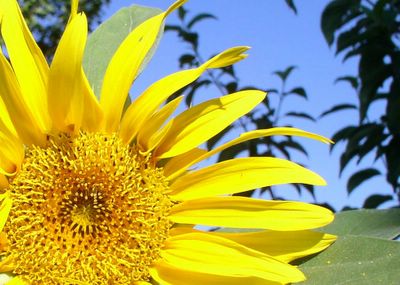 There are 60 or more species of the Common Sunflower. The wild sunflower is small and opportunistic especially on roadsides and neglected areas. There was a field of cultivated sunflowers on my route several years ago. It was a beautiful sight to observe a whole field of huge bright yellow faces looking toward the morning sun as I went to work. As they matured, the heads were so heavy they all looked at the ground.

The flower is really a flower head or disk bearing hundreds of small individual flowers. Each seed of the mature flower was a small flower with stamens, anthers and pistils. The petals are actually part of a single "ray" flower whose function is to attract bees to the small cluster flowers.

The Incan Indians of Peru worshipped the Sunflower as a symbol of the sun. Priestesses would wear necklaces of sunflowers made from gold. 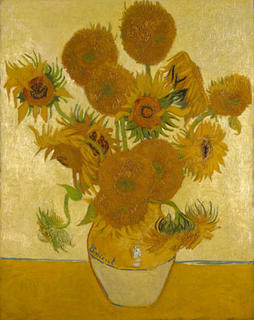 The Sunflower by Vincent Van Gogh was painted in 1888. The bright sunlight of South France inspired this familiar work. The blossoms are in three stages, newly emerged, wilting, and some dying. Traditionally in Dutch painting, this symbolizes the three stages of life. This information was taken from Painting the Weather web site.

The city of Goodland has a reproduction of one of Van Gogh's other famous sunflower paintings. Canadian artist Cameron Cross sold the town the idea for $150,000 and the Easel was dedicated in August 2001, during Goodland's Sunflower Festival. I posted a picture in our travel journal several weeks ago.
Posted by Linda at 7:45 PM No comments: 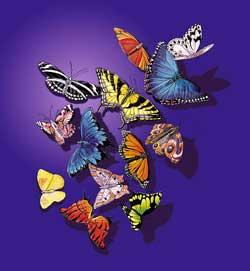 Everyday I see butterflies. They are one of summer's joys.

I display Monarch Watch's logo on my page with the thought that anyone with an interest in butterflies will click on it to find their home page. It is very interesting. I want to order a t shirt. They are extremely cool. (See right) I keep thinking I will just have Chip bring me one home from work since he lives over the hill.

Chip and his staff as well as over 100,000 recruits from all over the United States have tagged Monarchs to help with the study of a declining species. The Monarch Watch web site now has a data base to find out where these tagged butterflies have been recovered. Click on this link: http://www.monarchwatch.org/tagmig/recoveries.htm
and fill the blanks as desired. I was interested only in how many had been recovered in Kansas so I only typed in the state area. In other words, not all the spaces have to be filled. Good surfing on a hot summer evening.
Posted by Linda at 8:28 PM 1 comment: 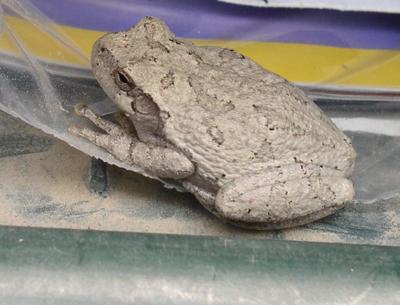 This was one of those mailboxes that open from both sides. The other (back) side was left open so I guess this little guy thought he was hiding in the back--that is until I opened the front.

This is a Gray Tree Frog. They are numerous in this part of the state. From the site map, it appears we are on the western edge of their habitat.

Chip, our neighbor, was hiking at the marsh and took this picture of the same species. 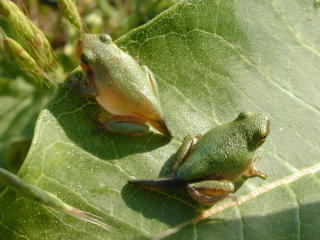 He wrote the following about the picture:

Gray tree frog - Hyla versicolor, large numbers of these frogs began emerging from temporary pools at the marsh on Saturday the 18th of June. When they first emerge, the frogs have remnants of the tails they used for swimming as tadpoles. The young frogs are green only becoming grayish after they move away from the lush green vegetation surrounding the pond. At the peak of the emergence is was common to find 10 or more frogs on a plant.

These little guys are quite active. We have several on the outside of our windows at night. With the lights on the windows are covered with bugs which, as Dan says, gives the tree frog an "all you can eat buffet."

Gone fishn' instead of just a wishn' 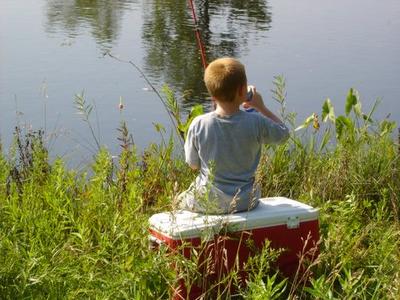 It was a perfect day to wet a hook and kick back with a soda. 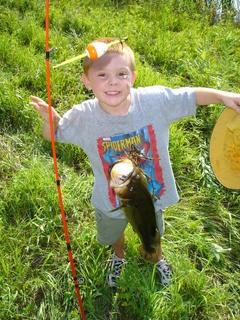 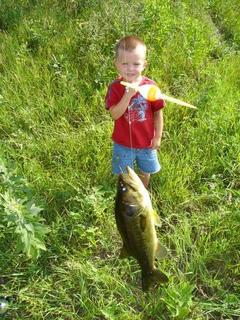 
All pictures taken by Daddy
Posted by Linda at 9:40 PM 3 comments:

This title, it came to me when I was thinking how nice the house will look with a fresh coat of paint and a new door. I was hoping it would all get done this weekend, but that was entirely unrealistic. For one thing, there is a lot of preparing that must be completed before the final coat. Thankfully, only the back of the house remains.

Our Salina family came in last night and Doug is here on his way to Lake of the Ozarks to meet the remainder of his family. They were fantastic help and we had some fun too. Dan & Doug will hit it again tomorrow.

Our grandboys went fishing this morning. I am hoping to post a picture tomorrow!
Posted by Linda at 10:35 PM No comments: