This is a pivotal game for the Cats. I would go as far to say it is a "must win." So, I am going to say the Wildcats will finish off Tech. Yes, it will be a win for the Kansas State University Wildcats by a score of 34 to 14.

This is a familiar saying but not something I want to think about often. When I was a kid, Mom made me say the bedtime prayer that ended with “If I die before I wake, may the Lord my Soul to take.” Most of the time, I just rattled that little prayer off and didn’t give it a thought because even then I didn’t want to think about not being here tomorrow.

Tonight we attended a visitation for the mother of a friend and fellow postal worker. Her Mother was crossing the street to attend Mass and was struck and killed by a hit and run driver. There were five members of the family there and they seemed to be handling the large number of people well. I have been thinking of them often in the past two days, though. They didn’t have an opportunity to tell their Mother goodbye or let her know how much they loved her. She was just—all of a sudden, gone.

So, as I write this, perhaps I am tired or just sad from thinking of the family tonight, but even though we don’t want to consider suddenly being taken away, it is so important to live our lives each day as if it is our last. Laugh a lot, tell someone they have done a good job, say thank you, be considerate of others feelings, talk less and listen more. Because, in the end, it isn’t the goodbyes on a death bed that lets your loved ones and friends know how you feel about them and how they feel about you, but it is how you lived your life and interact with them each day.

Chip is our neighbor and a National expert on Monarch butterflies, honey bees, milkweed, ducks, dogs, etc. And he is a Prof at KU!

Each year Chip and a group from Monarch Watch make a trip to the overwintering Monarch butterfly area of Mexico. The Blog of his trip is great reading (don't miss the Quick Time video)

This afternoon we spent four hours touring barns in the Flint Hills. It was a wonderful afternoon. We learned so much about the history of the region as well as the construction of the magnificent barns. I am posting two pictures of the largest barn we toured.

Huge oak trees were cut along the creek below the barn for its construction in 1905. The lower level of the barn was used for horses and the upper levels for storing hay. The elevated drive actually entered the barn on the third floor. The hay was then unloaded on that floor as well as dropped to the second floor. There is a passageway under the elevated drive with a 28 foot cistern that collected water from the barn. There are several grain bins under the drive. Larger grain bins once stood on each side of the elevated drive.

The family who built the barn endured much hardship. All three of the sons were civil war veterans only to come home and meet untimely and violent deaths. One was murdered and another wounded by wondering thieves thinking there was money hidden in the house. The third brother was killed by a flying limb while cutting wood.

Since the original family, the barn has passed through four owners with the current owners taking a great deal of time and expense to fix the barn to its original grandness. 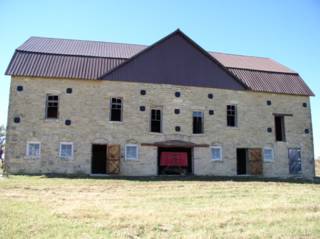 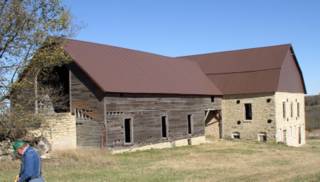 Elevated drive enters on the left side behind the tree 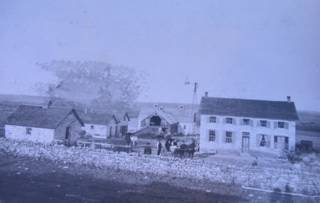 Picture of entire farmstead with barn in the background. Date unknown. The house & several of the out buildings are gone

The Rock Ranch had several buildings that were used as barns, either for livestock or feed storage. They were small and a simple design yet all built of the limestone rock found abundantly in the hills nearby. The barn of interest to me, however, was the first log cabin structure built and occupied on the claim.

The original owners were three brothers. They were Civil War Veterans and known as early pioneers of Wabaunsee Co. They also had spent time moving freight from Kansas City to Council Grove along what was probably the Santa Fe Trail. At that time there were three brothers but one was killed by the Kiowa Indians in 1864. It was not mentioned why.

The log cabin had a main room with a sleeping loft. Behind the living quarters was a stable for the horses. According to the historians present, this was not unusual for early structures in the Flint Hills. As you can see by in the picture, the barn/house had two interesting features: the door was very low and there was no chimney. Even the ceiling in the inside was low leading us to believe the family might have just been short. The sleeping loft was covered with straw which served as insulation as well as a soft sleeping surface. It must have been comforting to hear and most likely smell their valued animals nearby.

Tomorrow I will tell about the beautiful red barn. 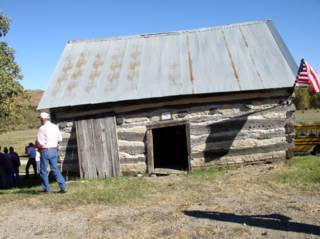 Original structure, but not original roof 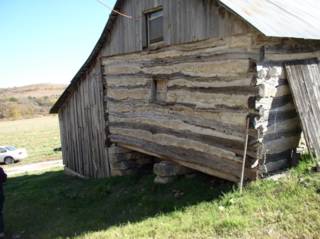 Perhaps the chimney came out the hole on the side. Those horses were mighty close.

The "Sump Barn" is probably the most published barn in Kansas. According to its owner, it has appeared on at least four magazine covers, four postcards and in barn books. As you can see from the picture, there are two features that set this barn apart. The first is the unique gable ends and second the red color with the white stars which is believed to be a trademark of the builder 100 years ago.

The Sump barn is a basement or hillside barn. As in the first barn I wrote about, the upper part of the hill allows access to the loft and the bottom to the animal or grain storage bays. The hillside type of barn became popular in the 1880s but the use of doors in the gable ends was a new feature. The doors would be hoisted up and hay could then be loaded or unloaded. Most barns built during that time were of oak, but this barn was almost totally walnut.

When the current owners purchased the barn several years ago, it was badly in need of repairs. They have put on a tin roof, repaired the cupola and replaced many of the support beams. The beams cost $65 each and must be special ordered from Colorado. They have also constructed an apartment on the top floor and currently have it rented. I thought this was a unique way to get money to work on the barn.

Finally, just as an interesting fact, the cupola on barns are there for more than appearance. The steam from the animals on the ground floor travels up and is vented. This is for the health of the animals and the structure. 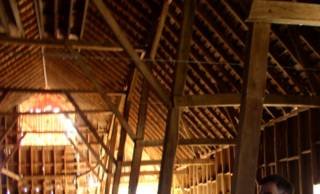 Inside the loft or upper floor